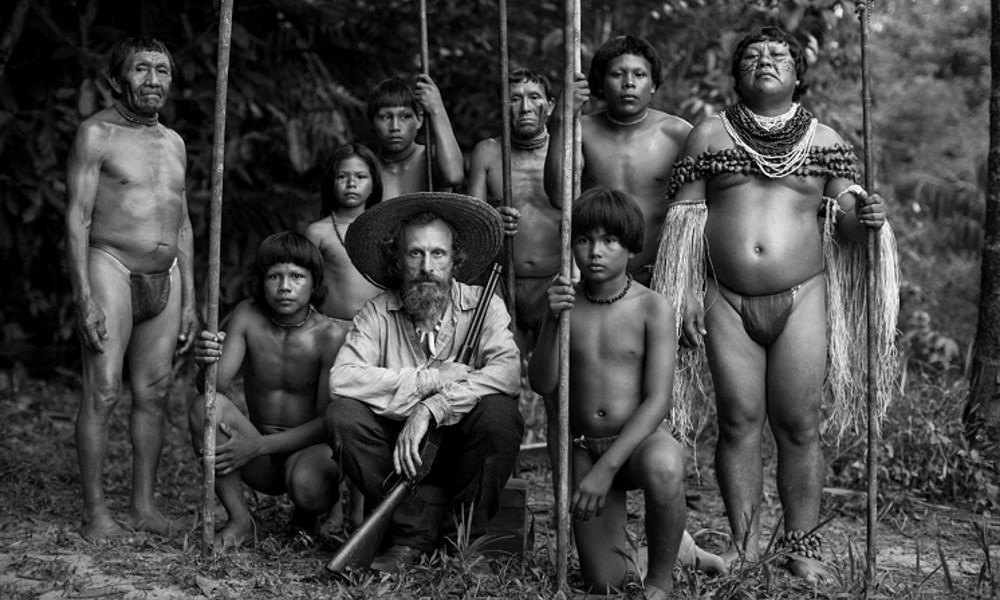 Embrace of the Serpent is a film about the Amazon like no other. While Werner Herzog’s Fitzcarraldo and Aguirre, Wrath of God depict white European explorers losing themselves in the jungle, Ciro Guerra’s masterpiece is uniquely centred on the experience of an indigenous protagonist visited by white travellers. Through undertaking extensive research on the Amazon’s cultural history and using indigenous actors with knowledge of its ancestral languages and customs, Guerra respectfully and authentically evokes an understanding of the world radically distinct from that of Western modernity. At the core of this understanding is a nonlinear view of time and space in which events are perceived in parallel rather than chronologically.

In this view, separate individuals are taken as one and the same. That is why German explorer Theodor Koch-Grünberg (Jan Bijvoet) and American scientist Richard Evans Schultes (Brionne Davis) are described as the same person by shaman Karamakate (Nilbio Torres and Antonio Bolivar), despite their journeys being forty years apart. Both men seek out Karamakate – a loner living apart from the tribes he believes to be either extinct or corrupted – for his familiarity with a rare and sacred plant known as ‘Yakruna’ that is said to exist deep in the jungle. Though their motivations differ – the gravely ill Grünberg has placed his hopes in the Yakruna’s mythical healing properties, while Evans is interested in the high purity rubber it is rumoured to grow upon – both desire knowledge that Western science has been unable to furnish them with.

This conflict between science and intuition runs through Embrace of the Serpent, expressing itself in heated discussions between Karamakate and his guests and in the opposing ways they interpret and react to situations. Both Evans and Grünberg lug around a panoply of suitcases, books, navigational devices and photographic equipment which they use to document and record their surroundings – something the nimble Karamakate finds absurdly cumbersome, proposing instead that they throw them into the river. While the Westerners are keen to eat fish at all times, Karamakate has an instinctive grasp of sustainability that prohibits doing so before the rainy season. His disdain turns into something darker when he attacks modern science for leading to “nothing but violence and death”. Yet this is no heavy-handed tale of Western decadence versus pure indigenous wisdom, with Guerra constantly emphasising the ambiguous relationship between the two.

Grünberg rebuts Karamakate’s critique of science with a powerful affirmation of its life-giving aims and its basis in “telling stories and understanding the world…just like your people do”. Like Guerra, Grünberg devotes himself in good faith to understanding the people of the Amazon, even freeing rubber plantation slave Manduca and adopting him as his assistant. Played with real subtlety by Yauenkü Migue, Manduca embodies the need for reconciliation between the two cultures. He reminds Karamakate that Grünberg is distinct from the ‘they’ that enslaved him, and insists that he is their last hope to “teach the whites about us” before “the end of everything”. Guerra and cinematographer David Gallego use the technical means at their disposal to reinforce Embrace of the Serpent‘s philosophical themes and create the overwhelming impression of a transformational journey into the wilderness. With the Amazon forming a spectacular backdrop, the film is shot in a crisp black and white – reminiscent at times of the austere photography of Sebastiao Salgado – that perfectly expresses the primordial binaries at the heart of the narrative.

Guerra devises highly creative ways of transitioning between the two time periods, including a stunning unbroken pan across the Amazon River that links together the several decades apart boat journeys of Evans and Grunberg. No artificial lighting is used, allowing for mystical night-time scenes by moonlight or by fire – including one set to the sublime harmonies of Haydn’s Creation – in which the striking contours of faces and the dancing shadows among the foliage are brought out magnificently. By the end of this transcendent odyssey one feels transformed and renewed; it is as if one has somehow captured something of the experience of the Cohiuano warrior, who must “abandon all and go alone into the jungle, guided only by their dreams, to find out in solitude and silence who he really is”.