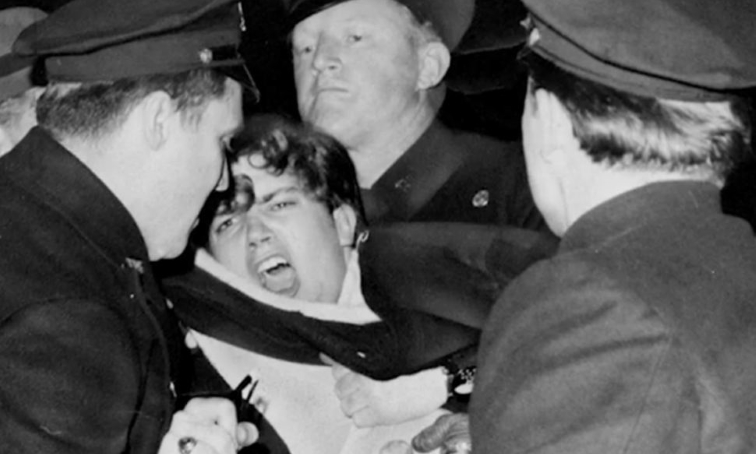 In a way the title of Charlie Siskel’s documentary American Anarchist is something of a misnomer. Anarchy as a political movement doesn’t get much in terms of description. Beyond some context about demonstrations in the sixties and William Powell, its subject is only partly American in that he spent his childhood in Britain and the majority of his life in a variety of other countries. However, in 1971 at the age of 19, the book store clerk went to the library, found the military manuals and using the old-fashioned copy and paste of simply copying concocted one of the most controversial and dangerous books of recent years: The Anarchist’s Cookbook.

Still available on Amazon and pirated across the internet for those less legally-minded anarchists, the book has been linked to school massacres, bombings and terrorist attacks. The glib, jokey title of the book is echoed in our own Orwellian neologism ‘domestic terrorism’. Siskel’s film is a confrontational series of interviews with Powell, a fascinating, evasive and articulate subject. He traces his own biography as an outsider, through the political crises of the late 1960s early 70s and his own authorship of the book. It’s obvious from the outset that Powell has dealt with the book and its unwanted fame by blanking it out. He doesn’t own a copy and when asked about statements he made in the book has to be lent Siskel’s copy to read out excerpts and give his reaction.

This isn’t Errol Morris coming up against a worthy adversary like Robert McNamara in The Fog of War. Powell is often being confronted with information he simply didn’t know, as when Siskel reels off a list of massacres and attacks which have been linked to the book. The J’accuse might well be justified given the damage the book has caused, but at times the interview feels like a door-stepping, even though the subjects – William and his wife Ochan – are trying to co-operate fully. In fact, Ochan accuses Siskel of asking leading questions and the filmmaker does have a liking for those front-loaded negative formulas such as “Do you see no need to accept responsibility…?” and “Is there nothing more you could have done?” Powell has spent his life pursuing a teaching career, concentrating specifically on children with learning difficulties. There is an obvious contrast between his apparently comfortably off life in rural France and the devastation that is shown in clips with a highlighted phrase about The Anarchist’s Cookbook being found in the killer’s apartment.

The responsibility surely isn’t only the man who wrote and published the book at 19. The issue of its continued publication could be one that deserves to be raised with Amazon which – unlike Powell – has been making money of the book for some time now. When Powell decides to contact a senator who is campaigning for the removal of the book, Siskel suddenly withdraws from the picture. To use a question Siskel himself might have formed: couldn’t he have done more to give Powell the phone number of the senator’s office rather than just filming him trying to find it? Powell died unexpectedly after filming and the title that reveals this comes too quickly after the last gotcha question that closes this occasionally fascinating but deeply unsatisfying doc.