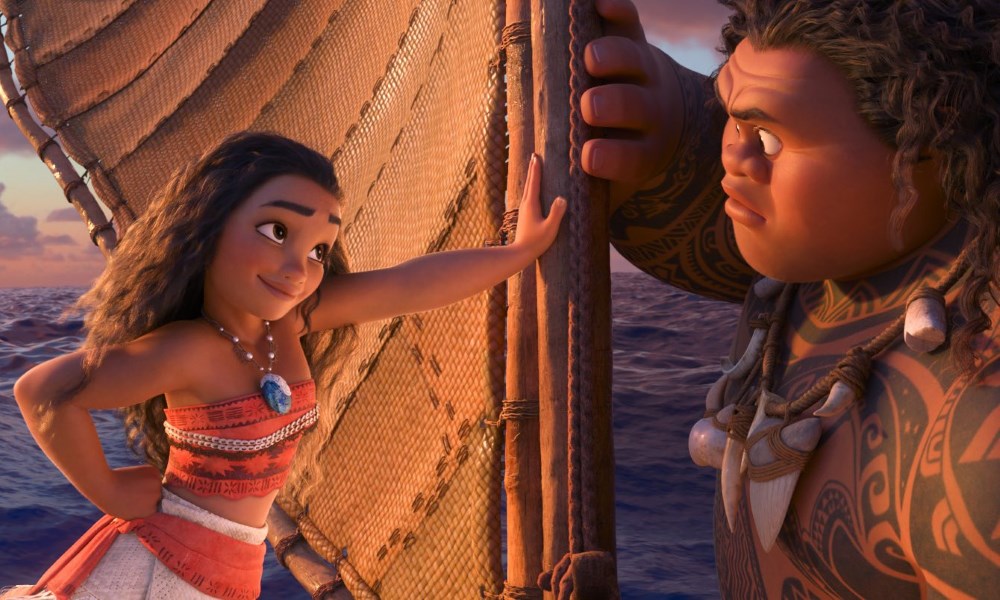 ★★★★☆
In 2013, Disney’s phenomenally successful Frozen marked a turning point for the House of Mouse in the handling of their trademark princess characters. The film’s lauded ‘true love’ reveal was a re-defining moment and their newest sure-fire hit, Moana, takes another confident step in the right direction, this time while equally navigating the familiar narrative waters of a hero’s quest. Despite lacking Frozen‘s grandstanding moments – the aforementioned climax or the now ubiquitous Let It Go – this is an altogether stronger affair. Moana is a toe-tapping, heart-stealing adventure packed with laughs and featuring a kick-ass princess with nary a love interest on the horizon.
This is a film about the coalescence between tradition and innovation – in this case taking place in a mythic Polynesian seascape – and as such the eponymous Moana (Auli’i Cravalho) represents much the same thing. The film is well aware of this itself and when Moana argues that she’s not a princess, the trickster demi-god Maui (Dwayne Johnson) retorts: “If you’re wearing a dress and you have an animal sidekick, you’re a princess.” She is certainly the latest in a long Disney lineage but breaks the mould as well as conforming. Her proportions are more appropriate for a teenage girl than has often been the case and she’s the heir to the chiefdom of her people regardless of her gender.
She’s wilful, resourceful and incontestably the film’s hero without the need for a charming prince to validate her. Disney have entrusted Moana’s journey to four of the very safest hands – those of Ron Clements and John Musker who made The Little Mermaid, Aladdin, and Hercules. It’s difficult not to see echoes of those previous films in this one and for all of the sly jokes at the expense of the genre’s clichés, the film does broadly adhere to them. Moana’s rousing ballad, How Far I’ll Go is classic Disney and specifically seems to recall similar ditties sung by Ariel and Herc – that won’t stop it still being in your head days later, though.
Elsewhere, Dwayne Johnson shows off his musical chops with the Genie-esque You’re Welcome, and as well as being able to carry a tune, the actor’s Maui is oafish and charismatic in equal measure. The ragtag band of adventurers also resemble Aladdin‘s, complete with hero/princess, magical friend, animal sidekick (in this case possibly the stupidest and funniest of film roosters, Heihei) and it’s very own magic carpet in the form of the living spirit of the ocean. It, among other things, is gorgeously rendered – this is perhaps the most beautiful Disney film yet – including a cute band of coconut pirates and the living tattoos on Maui’s skin which themselves hark back to the Greek muses of Hercules.
Meanwhile, songwriter Lin-Manuel Miranda (of Hamilton fame) is at his most creative with Shiny, a bizarre and brilliant interlude that crosses David Bowie with Flight of Conchords in the lair of Jermain Clement’s gold-obsessed crab monster, Tamatoa. Typical villains aren’t really the order of the day here, though. Rejecting the myth of redemptive violence, Moana‘s obstacles are cultural entrenchment and the fear of leaving the safety of our own reef. In some ways it’s got a Pixar quality to its message, but for all its whizz-bang and its princess, this is a film in the grand tradition of the Disney adventure – and what a voyage it is.
Ben Nicholson | @BRNicholson