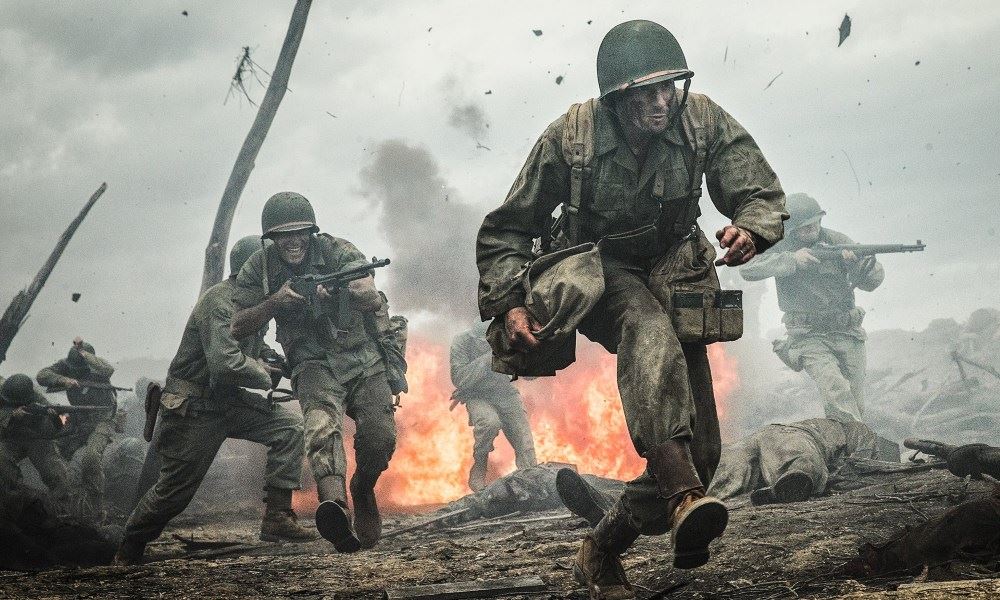 No one would mistake Mel Gibson for the embodiment of subtlety. From his blood-soaked Scottish romp Braveheart to his blood-soaked The Passion of the Christ, Gibson has always made his films with sledgehammer blows, a simplistic moral universe and thumping melodramatic beats, usually in slow motion. Anyone worrying that the topic of a conscientious objector who won a Congressional Medal of Honor for bravery might stifle Gibson’s baser tendencies can rest easy: Hacksaw Ridge is a gruesome, pounding war film about the courage of a deeply religious man in near-unbelievable circumstances.

It’s also a directorial comeback for Gibson, whose last film the Mayan chase movie Apocalypto screened ten years ago and who has had his share of self-imposed woes. Andrew Garfield plays the role of Desmond Doss, the hero of the piece. Growing up in rural Virginia – by the famed blue-ridged mountains – Doss is a simple man, a Seven Day Adventist who finds a penchant for helping people when he assists a man injured in an accident. At the hospital, he falls in love with a young nurse Dorothy (Theresa Palmer) and a romance develops. At home, things are not going so well. Although he loves his saintly mother (Rachel Griffiths) and is pals with his brother, his father (Hugo Weaving) is an abusive alcoholic. A veteran of the First World War, Doss Sr. is a casualty of it as well.

Doss’ friends are all in the cemetery now and so when the Second World War breaks out and his sons enlist he is horrified. Like many men who go to war, Desmond is faced with leaving his fiancée at home and confronting a harsher world, but unlike them, Desmond refuses to touch a rifle. His Captain (Sam Worthington) tries to have him sectioned and, when that doesn’t work, Sergeant (Vince Vaughn, in a substantial role, which allows him some comic business) directs the rest of the platoon to kick some sense into the would-be Gandhi. With quiet determination, Doss resists, even when he is given several offers of relatively painless outs. He wants to serve his country, he wants to do so as a medic, but he refuses to touch a rifle. A court martial is resolved and it’s no spoiler to learn that Doss is shipped with his regiment to Okinawa. It is at this point the film moves away from spiritual struggle and laces up its combat boots. Faced with a dug-in Japanese enemy, the platoon must take the ridge and hold it.

Other units have tried and been thrown back. Even to get to the ridge involves climbing up a net hanging from a cliff face. Why and how this rope net is still suspended intact is a distracting question which unfortunately goes unanswered. The battle scenes that follow are delirious, bloody and visceral. There’s a leering quality and Gibson and screenwriters Andrew Knight and Robert Schenkkan make sure that Doss’ pacifism doesn’t get in the way of the action. In fact, at some point Doss is so involved in the fighting and at least facilitating the fighting that it seems like his not touching a weapon seems like a technicality. The pacifism of the film begins and ends with Doss. War is definitely Hell – flamethrowers exploding and enemies emerging from bunkers gives more than a taste of the infernal depths – but it’s also incredibly exciting. The mangled bodies and the gruesome realities of the battlefield are offset by Doss’ Christ-like sacrifice with his prayers, his bible and his sense of divine mission.

Hacksaw Ridge will undoubtedly appeal to a large Christian audience, while the NRA folk needn’t worry about the hero not liking guns because Vaughn kills enough ‘Japs’ (and they’re definitely ‘Japs’ here) for two. Garfield is a likeable and believable hero. His ‘aw-shucks’ goodness occasionally drops into Forrest Gump territory, but there’s something honest and open which he communicates. The same can’t always be said for the film itself as it too often sanctifies Doss in a slow motion shower as Rupert Gregson-Williams’ lush score hits all the power chords and tugs at the heartstrings. But there’s no getting away from it, Gibson has produced another bombastic, crowd-pleasing and obviously blood-soaked movie which expertly glorifies that which its hero was against.