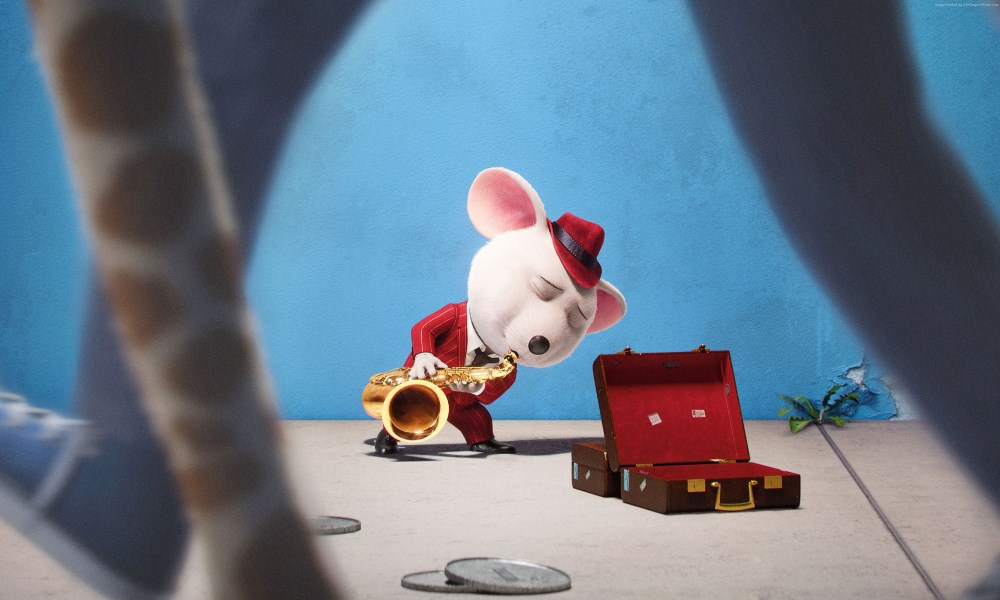 Have you ever wanted to see an elephant overcome stage fright and belt out Don’t You Worry ‘Bout A Thing by Stevie Wonder to adoring fans? Or hear a gorilla tinkle the ivories to Elton John’s I’m Still Standing? Perhaps a mouse in a fedora and purple suit crooning to a little bit of ‘Ol Blue Eyes? Now’s your chance. Sing is the latest endeavour by Illumination Entertainment, the animation studios who brought us Minions and Despicable Me.

Buster Moon, a failing theatre producer and koala played with typical charm and gusto by Matthew McConaughey, has one last chance to rescue his beloved stage – and father’s legacy – from foreclosure by the big bad bank by seeking out the latest shining jewel at his very own lung-busting talent contest. “Who wants to see another singing competition?” says an early doubter. And this sentiment may well be shared by many grown-ups weary with Simon Cowell’s high-strung attitude and trouser line but thankfully sob stories and put-downs are at a minimum here and parents and offspring alike will see humour and valuable lessons in what is admittedly a formulaic affair but one that entertains nonetheless.

There is something reassuring and enjoyable to the familiarity of such a joyous, uplifting and uproariously funny affair and it must be said that the vocal talents of those on show is quite remarkable. Any film that begins with a rendition of Golden Slumbers by the Beatles is off to a good start and after a whip around town to gospel, soul, rock and more we’re well aware that Sing will be as eclectic musically as it is diverse in terms of the animal talent on show: Rosita (Reese Witherspoon) is an underappreciated and run-off-her-hooves porcine housewife; Johnny (Taron Egerton, whose voice really is quite something) a gorilla dreaming of stardom but dragged down the same criminal path as his old man (Idris Elba); Ash (Scarlett Johannson) is a spiky porcupine rock chick whose boyfriend is a waste of space.

We’re hitting familiar notes here but kids will learn not to go after fame for money – like Seth MacFarlane’s greedy rat, Mike – and that being brave and having faith in yourself is all that matters, like Tori Kelly’s big-trunked Meena. There are slip ups and a disastrous flood along the way, but the show must go on, you have to rally round when friends and family are in need and most of all you must learn to never go up on your dreams. It’s trite and a little cliched but sometimes that’s just what you need from a trip to the cinema.