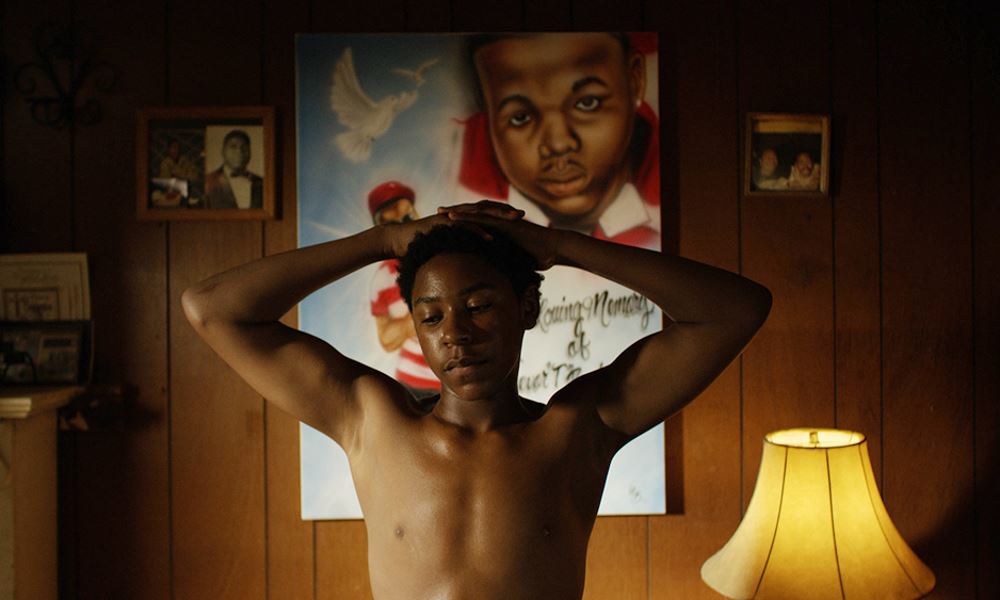 To 13-year-old Dayveon (Devin Blackmon), who we first encounter cycling down a deserted Arkansas street, “everything is stupid”. The concrete, the houses, the trees, even the sky above him; “everything is stupid”. A stream of consciousness made spatial, Amman Abbasi’s debut feature Dayveon is an experiential coming of age tale very much anchored to its surroundings. A mood piece first and foremost, Abbasi takes the intense feelings of early adolescence, and watches how tragedy transforms them.

Dayveon, or “Day” as he known to his friends, spends the sweltering summer roaming the empty streets of his rural hometown in a state of mourning after the death of his brother. It’s an area overrun by poverty, yet despite the tragic circumstances there’s a poetic beauty to Dayveon that prevents it from descending into abject misery, even when Day, despite the best efforts of his sister’s boyfriend, Brain (Dontrell Bright), falls in with a local gang; drawn in by their sense of brotherhood and camaraderie. Abbasi moved to Little Rock, Arkansas at age nine and uses his experiences to bestow the film with a depth and richness that transcends the present moment, creating a story that resonates on a dreamlike register.

Coloured by verdant green nature and the red stain of rusting metal, Abbasi steeps the viewer in the sorrow and beauty of this poverty stricken milieu, yet an over reliance on elaborate cinematography soon becomes distracting, and those familiar with the early work of David Gordon Green, won’t be surprised to see the director’s name appear as an executive producer. Intended to amplify the interior life of Day, these unnecessary flourishes often result in the opposite, distancing the audience from his suffering. No more so than the film’s piano-led score, composed by Abbasi, which feels far more attuned to the viewer’s reaction than Day’s experience.

Then there’s the employment of a wasps nest just outside Day’s house as a constantly buzzing metaphor for the dangerous world of gang violence on his doorstep. Without giving much consideration to the context that breed such an environment, bar a couple of fleeting scenes where one of the Day’s gang attempts to find work as a farm hand, it begs the question as to what the film is trying to accomplish by focusing on the gang; especially when the film’s ephemeral style distances the action from reality, laying blame on the gangs for Day’s downward spiral into a life of crime and not the faulty idealism behind the myth of American opportunity.

In the moments where Abbasi restrains these stylish impulses and allows the chemistry of the cast (all of which are first-time actors) to come to the forefront, the film comes alive, with the nuanced and naturalistic performances of Johnson and Bright deserving special praise; their strained relationship so fraught with tension that at times the film could easily be confused for documentary. One scene in particular, where Day is confronted by Brian after being “jumped in”, an initiation process where he is attacked by the gang in order to prove he’s tough enough, is particularly unsettling. Moments like this, when Abbasi’s camera watches on instead of drifting to the heavens or skirting into the glare of the sun, prove far more effective and suggest Abbasi could be a director worth watching out for.