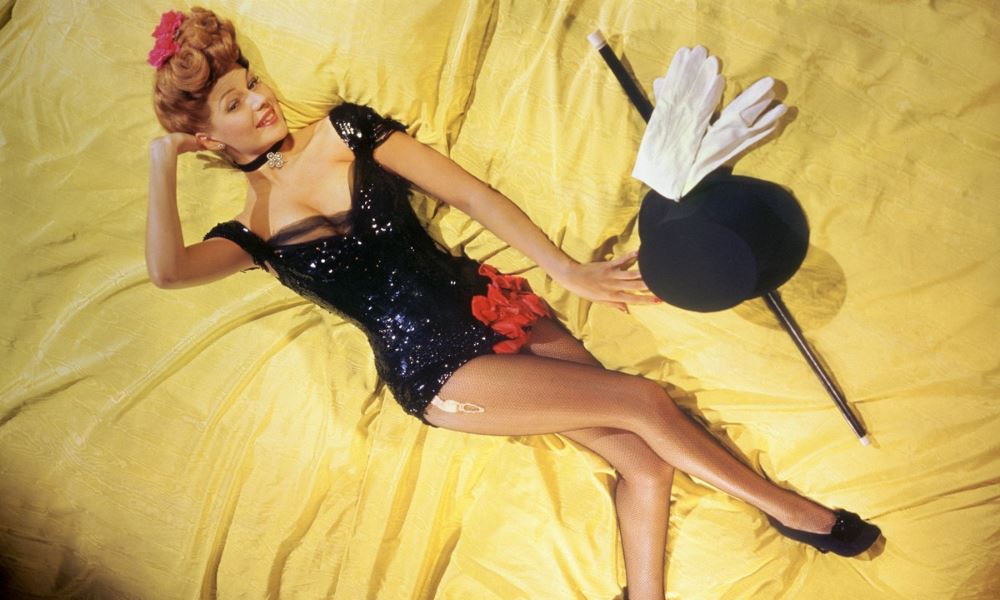 “Men go to bed with Gilda, but they wake up with me.” Rita Hayworth’s pithy observation on the consequences of her most famous part could just as easily have been applied to her role in the 1944 musical Cover Girl. Hayworth is Rusty, a talented performer in a small-time dance routine, directed by her beau, Danny (Gene Kelly). Going with her friend to a cover shoot audition, Rusty’s star quality shines through and she’s eventually offered the part, initially inspiring her friend’s ire before causing more problems with Danny.

All the trappings of a classic musical are here: a rich, vibrant colour palette, a seasoned, gorgeous cast, and a big Hollywood story. Hayworth in particular is radiant, making it very easy to believe Rusty’s rapid ascendancy to the big time. Meanwhile, Kelly invests his Danny with pathos, heart, and conflict: madly in love with Rusty, he knows that he is holding her back but still can’t quite let her go. The early scene in which she receives the offer of a contract from John Coudair (Otto Kruger) is both heart breaking and infuriating – loyalty, selfishness and ignoble desire play variously through both characters, hastened by their theatre associate Genius’s (Phil Silvers) obliviously cruel intervention.

Coudair has a strange fixation on Rusty, who reminds him of his first love, Maribelle. This is perhaps Cover Girl’s major misstep: Hayworth also plays Maribelle in flashback – a fine conceit that overstays its welcome by needlessly distracting from the main plot. Compounding this issue is the film’s dearth of memorable, dramatic songs – in this regard it’s difficult to shake the feeling that both Kelly and Hayworth’s talents are a little wasted. Indeed, it sometimes feels that Cover Girl is one film split into two – a psychological melodrama and an eyes-and-teeth musical – neither of which ever quite cohere.

The exception to this – a sequence in which Danny confronts his reflection in a shop window – is terrific: a dramatic, emotional number that confounds and delights in its technical wizardry. This is what we’re here for, larger than life emotions played out with unparalleled skill and imagination. Hayworth’s numbers, too, are alluring and gorgeous, especially her stage-bound numbers, and a late sequence with a parade of cover girls is impressive if a little long. But the flashback subplot and a weird familial twist neuters the simple potency of the main narrative, and there are as many so-so musical sequences as there are triumphs. Cover Girl is a musical that delights as much as it frustrates.