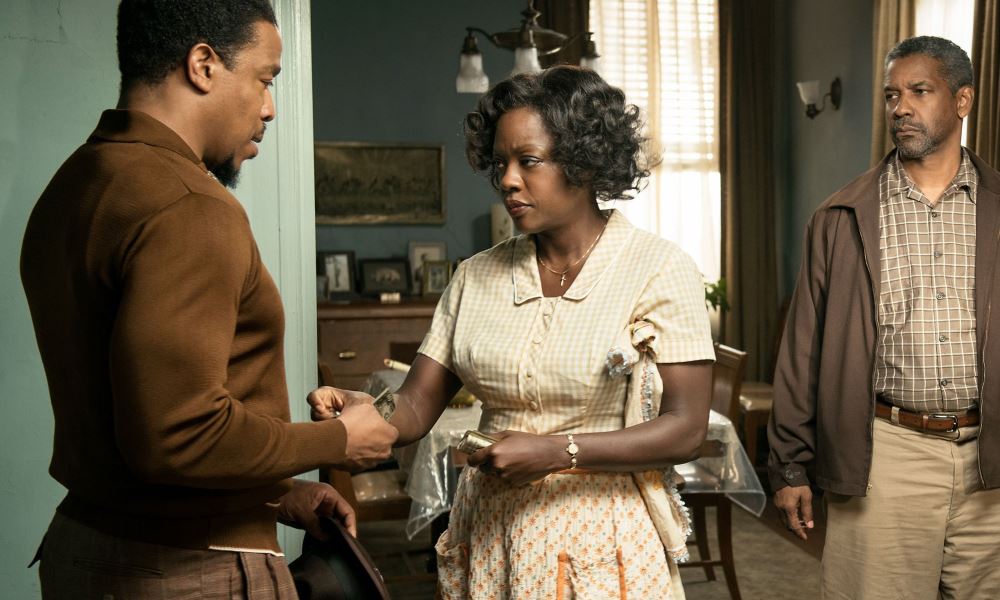 Following a string of sub-Tony Scott thrillers and the less than magnificent The Magnificent Seven, Denzel Washington returns to acting with a visible hunger in an adaptation of August Wilson’s Pulitzer Prize-winning drama Fences. Working behind the camera in his third outing as director, Washington stays as true to the stage play as he can, substantially retaining the cast from his 2010 Broadway revival of the play. We first encounter Washington’s Troy knocking off work with his best friend Bono (Stephen Henderson).

Troy’s almost monologue continues all the way home and into his backyard where Troy’s long suffering Rose (Viola Davis) becomes another audience member to Troy’s incessant stream of story and self-mythology. The rhythm and sheer verbosity and music is beguiling, as Troy’s bluster continues fuelled by occasional nips of gin from the bottle. Troy hides himself even as he seems to place all his cards on the table. He’s a hard-working, fiercely proud man; a graduate of the university of hard knocks as he relates to his grown son Lyons (Russell Hornsby). And yet there is something incomplete in the picture.

Troy’s domesticity is a late arrival and still not altogether convincing, as witnessed by the fence he is tellingly slow in getting up around his yard. This full-on metaphor is unembarrassed in its theatricality as is the role of holy fool Gabriel (Mykelti Williamson), Troy’s mentally ill brother, whose delusions about Saint Peter chime eerily with Troy’s own story about his battle with Death during a bout of pneumonia. Troy is the head of a family who sucks all the oxygen out of the room, never tiring of the sound of his admittedly fantastic voice. His bigness means that his sons lumber behind in his shadow. His elder son Lyons, a jazz musician, comes around looking for a handout and some parental approval and his young football star son Cory (Jovan Adepo), seems to set to supersede Troy’s own achievements in baseball – though this is a prospect he views with ill-disguised loathing.

This being a theatre piece an act break revelation tips all our certainties out of the window and forces us to reassess all we’ve seen and heard so far. Washington dominates Fences’ first half but as the film goes on Davis stakes her claim, moving from a stoic lover to something like righteous fury. With the lion’s share of the movie taking place in one location and no soundtrack, some will find Fences insufficiently cinematic. However, with its depth and power, Wilson’s play is a blue-collar Death of a Salesman and the music of the dialogue, with Davis and Washington at the peak of their powers, makes the whole thing sing.