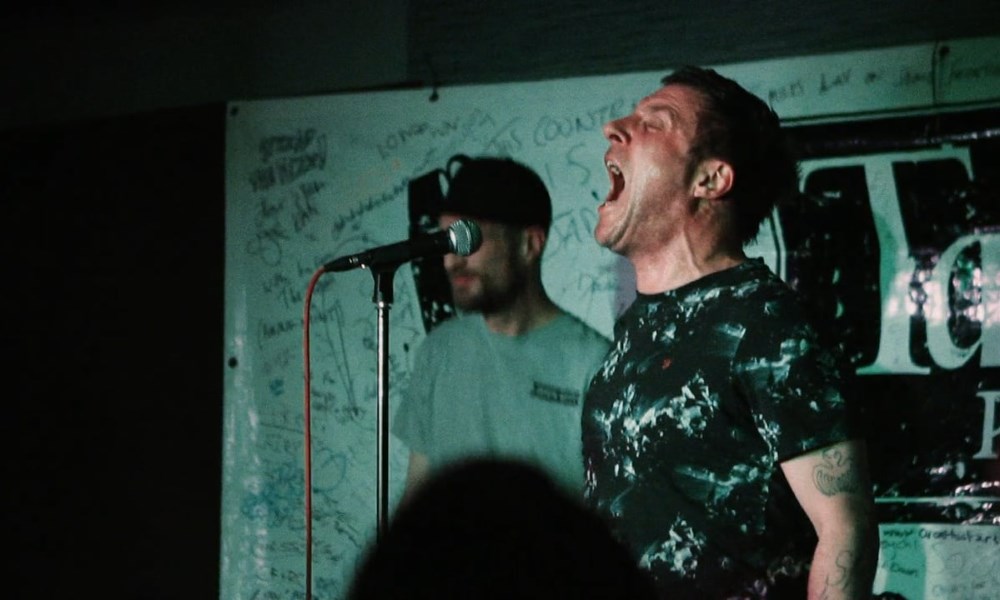 Great music documentaries capture bands in the ups and downs of their profession: glorified and cheered in the stage lights one moment, sat bored in the dressing room in the next – drinking warm Carling and picking at the crisps. Bunch of Kunst (a tour documentary on Nottingham’s refusenik agit-punk specialists The Sleaford Mods) is like D.A. Pennebaker’s Don’t Look Back, but with more frequent use of the word ‘twat’ and zero reverence for the music industry itself.

Although the duo’s frontman Jason Williamson (mockingly referred to as ‘Elvis’ throughout the film by their manager, Steve Underwood) has called the film a “perfect antidote to those sexy, racy, rock-n-roll yawns” it doesn’t quite break the mould with as much gusto as their triumphantly venomous music. Granted, it’s hard to imagine any other frontmen who’d consent to using footage of their dad turning to camera and saying “Jason’s been a wanker all his life” and interviews with Williamson’s wife in which she complains that he develops ‘cunt flu’ after returning home from tour demonstrate an expected but still refreshing lack of ego from a band who do, after all, detest anything that seems too self-congratulatory or pretentious.

However, its tactic isn’t dissimilar from Shut Up and Play The Hits, the LCD Soundsystem documentary which also made sure to undercut the celebrity of its star, James Murphy, by showing him mooching around the streets of Brooklyn and looking after his pug. The core difference is that Bunch of Kunst refuses to do any navel-gazing or indulge in the possibility of anti-star posturing: it’s a matter-of-fact documentation of how a few middle-aged blokes finally get some traction and hard-won acclaim after years of struggle in the independent music scene. Fans of the duo and their music will enjoy the live footage and backstage insight.

The sequence in which Steve Underwood jokes about ‘Camden indie’, backstage at the O2, unaware that the bass player from The Libertines is trying to get past him, is a glorious highlight. But it should also be required viewing for anyone who wants to take a proper look at the graft of tiny independent labels, the distinctly unglamorous reality of touring the UK toilet circuit in a hatchback and the joy of winning round high-profile tastemakers entirely on your own terms.