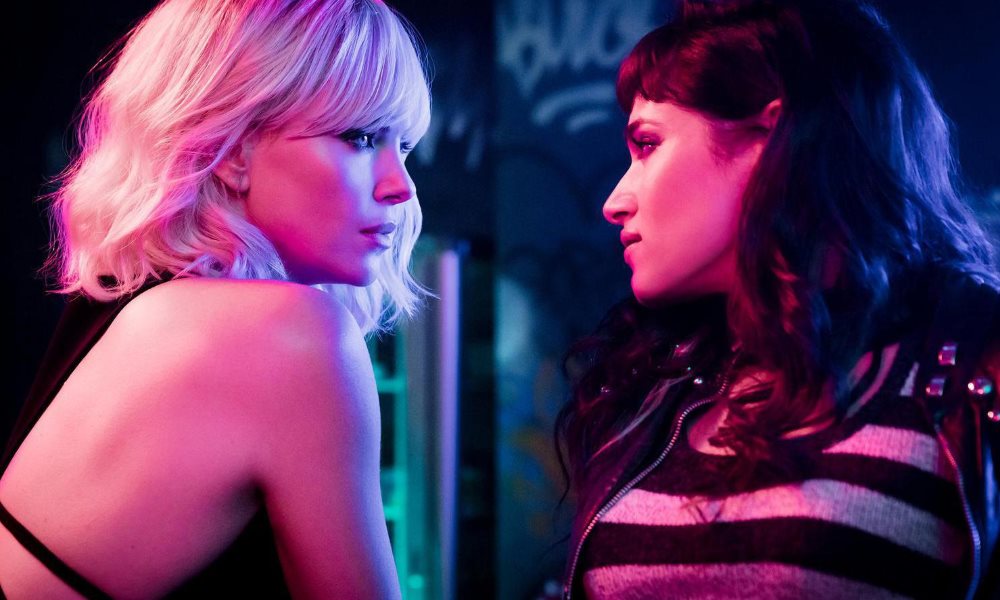 The opening credits to David Leitch’s Atomic Blonde boldly announce that this is not the story of the Berlin Wall’s fall – its symbolic destruction instead serving as a backdrop for superspy Lorraine Broughton’s (Charlize Theron) often thrilling misadventures.

Opening on the first of many gorgeously composed, monochromatic shots, Lorraine emerges from an ice bath, her muscular back wracked with bruises and cuts. This brief sequence tells all we need to know about Lorraine – cold, brutal (and brutalised), and with her body half submerged and unnaturally lit, possibly duplicitous. Theron’s hard sensuality is a perfect fit for the role, recalling her robotic turn in Prometheus, but suffused with a vulnerability that balances out the toughness. Called in to HQ to account for a recent mission gone wrong, Lorraine curtly tells her story in flashback to MI6 boss Eric Gray (Toby Jones) and CIA man Emmett Kurzfeld (John Goodman).

The mission in question follows the assassination of MI6 agent Gasciogne (Sam Hargrave), who was in possession of a list of fellow operatives, now in the hands of a KGB officer. Lorraine is to rendezvous with David Percival (James McAvoy) in Berlin, reacquire the list as well as securing the defecting Stasi agent who furnished Gasciogne with it. Cue plenty of double and triple crossings, a plot that exponentially twists itself into daft convolutions, and lashings of impeccably choreographed action, all set to an arch 1980s soundtrack.

As the co-director of John Wick, it’s no surprise that former-stuntman Leitch’s action sequences are the star attraction here. A bravura scene in an apartment block treads the fine line between grounded brutality and ludicrous, exhilarating spectacle. The camera, intimately aware of its space, uses a fluid sense of rhythm to direct the audience’s attention like the misdirecting gestures of a magician. But John Wick 3 this is not – the singular purpose of that series is sacrificed for a plot that becomes increasingly incoherent, leading to a somewhat slapdash finale.

In place of coherence, however, is a palpable on-screen texture, from the neon-soaked locales, evocations of East and West Berlin, and the period setting set to an obvious but no-less effective soundtrack. Atomic Blonde is a film that unapologetically bears its influences for all to see: the action choreography of John Wick, the European setting of Bourne, the sexuality of Bond – here rendered with a superfluous but charged dalliance with Sofia Boutella’s Delphine Lasalle – and the more 80s-than-80s lighting of The Neon Demon.

In the film’s richest sequence, Lorraine fights a KGB agent behind a cinema screening of Andrei Tarkovsky’s Stalker before Lorraine crashes through the screen and out the other side. While the lighting recalls a similar sequence in Skyfall, the mise en scène pays playful homage to the Russian film’s preoccupation with space and borders, thematically connecting it to the German border that will also soon be crashed through. A little overlong and lacking the thematic clout to justify its knotty plot, Atomic Blonde is nevertheless an exhilarating, visceral actioner, more than making up for its flaws with a surfeit of verve and style.