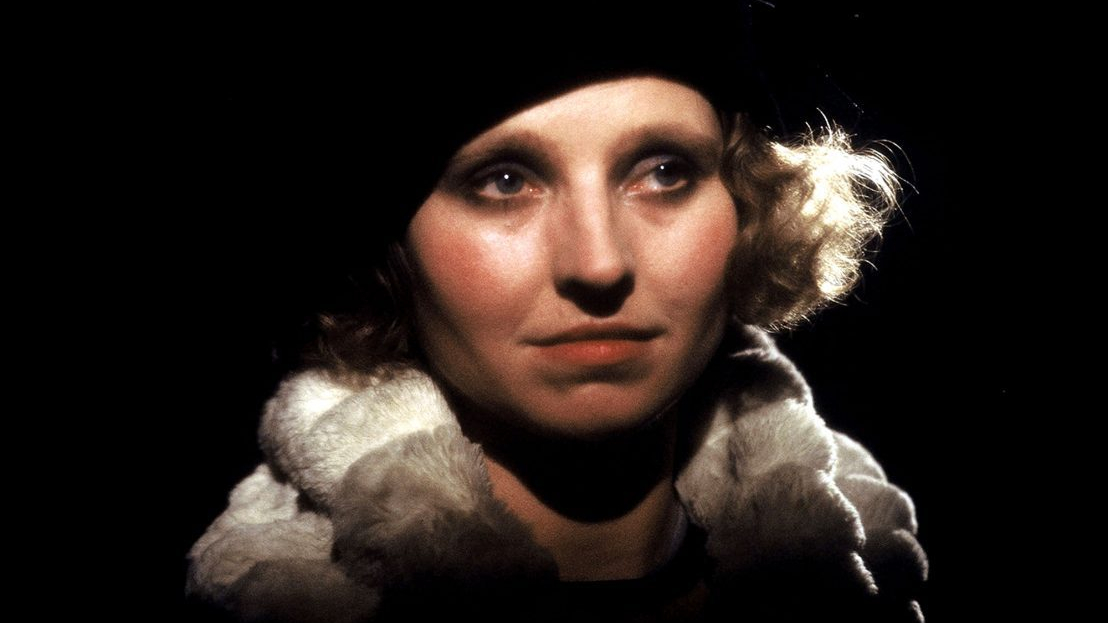 In 1928 Berlin, Franz Biberkopf (Günter Lamprecht) is released from prison after serving four years for the manslaughter of his girlfriend, Ida (Barbara Valentin). Based on Alfred Döblin’s celebrated 1929 novel, Rainer Werner Fassbinder’s Weimar-set odyssey is some 15 hours long. Exhausting and exhaustive, Berlin Alexanderplatz is an epic tale of brutality, betrayal and redemption.

Split into 13 parts and a meta-textual epilogue, Fassbinder’s masterpiece prefigures Twin Peaks as a work that straddles the definition of film and television. Filmed on TV-friendly video and staged mainly in a small array of internal locations, Berlin Alexanderplatz nevertheless has a uniquely cinematic quality.

The camera is characterised by an uneasy, restless movement, closing in on characters in deep conversation as if eavesdropping on them from a table at an inn. Xaver Schwarzenberger’s cinematography is relentlessly oppressive, framing characters behind french windows and the bars of bird cages, hemming them in with a 4:3 aspect ratio. Tellingly, this typically televisual frame is almost identical to the classic academy ratio commonly used in Weimar-era silent cinema, a tradition Fassbinder alludes to both in his dramatic staging and the frequent use of intertitles.

Casting a yellow glow over everything, the dim electric lights of the film’s interiors. It’s at once warmly nostalgic and sickly, almost as if the imminent malaise of Nazism can be felt in the atmosphere. The director’s uncompromising vision is an impressive feat, and the film’s sheer length challenging the stamina of even the hardiest adherents to the church of Fassbinder. The esoteric sub-titles for each segment are apt descriptors of the viewing experience – Part 1’s “The Punishment Begins” proves especially memorable.

Yet there’s an ebb and flow to the drama unlike episodic television or conventional narrative cinema. Rather than structuring a story that maximises dramatic momentum, Fassbinder emphasises the endless cycles that Franz is trapped in. Insisting that he will stay away from a life of crime, he’s inexorably drawn back in to it, while the shark-like Reinhold (Gottfried John) and his ne’er-do-well associates prey on Franz’s misplaced loyalty. Capable of both tenderness and horrifying brutality, Franz is a profoundly unlikable character, guilty of manslaughter and a routine beater of women. Yet with his stunted emotional maturity comes an almost childlike naiveté; Franz Biberkopf has the body of a brute but the tenderness and volatile, emotionally helpless temperament of a child.

The film’s 13 main sections offer a compelling and complete drama in themselves, but it’s not until the two-hour epilogue that Fassbinder finally tips his hand. Entitled “My Dream of the Dream of Franz Biberkopf by Alfred Döblin”, the director steps outside the main narrative to show us the broken mind of Franz after he learns of Reinhold’s final betrayal. It’s an astonishing volte face of style and form, eschewing the realism of the earlier episodes in favour of a fully symbolic, psychological journey, one which effectively works as a film in its own right.

Franz’s past traumas are repeated, reformed and inverted as characters and incidents fold into each other, while the spectre of rising Nazism – only a background texture in the main narrative – fully materialises in front of us. Where the source text is celebrated as an important modernist novel, here Fassbinder’s Dream of Döblin’s Biberkopf becomes a vision of post-modernity. Even time and history itself seems to crash in on themselves while anachronistic echoes of Leonard Cohen and Kraftwerk tunes find their way into Franz’s fevered dreams.

As one of the longest films ever made and uncompromising in its depiction of psychological ruination, Berlin Alexanderplatz is not for the faint hearted. There’s no denying, too, that the film’s repetitious cycles of violence and misery often feel like an endurance test. But as Franz perseveres in his a quest for redemption, so too do we, discovering in the final, surrealist phrase of Fassbender’s magnum opus a profound catharsis.