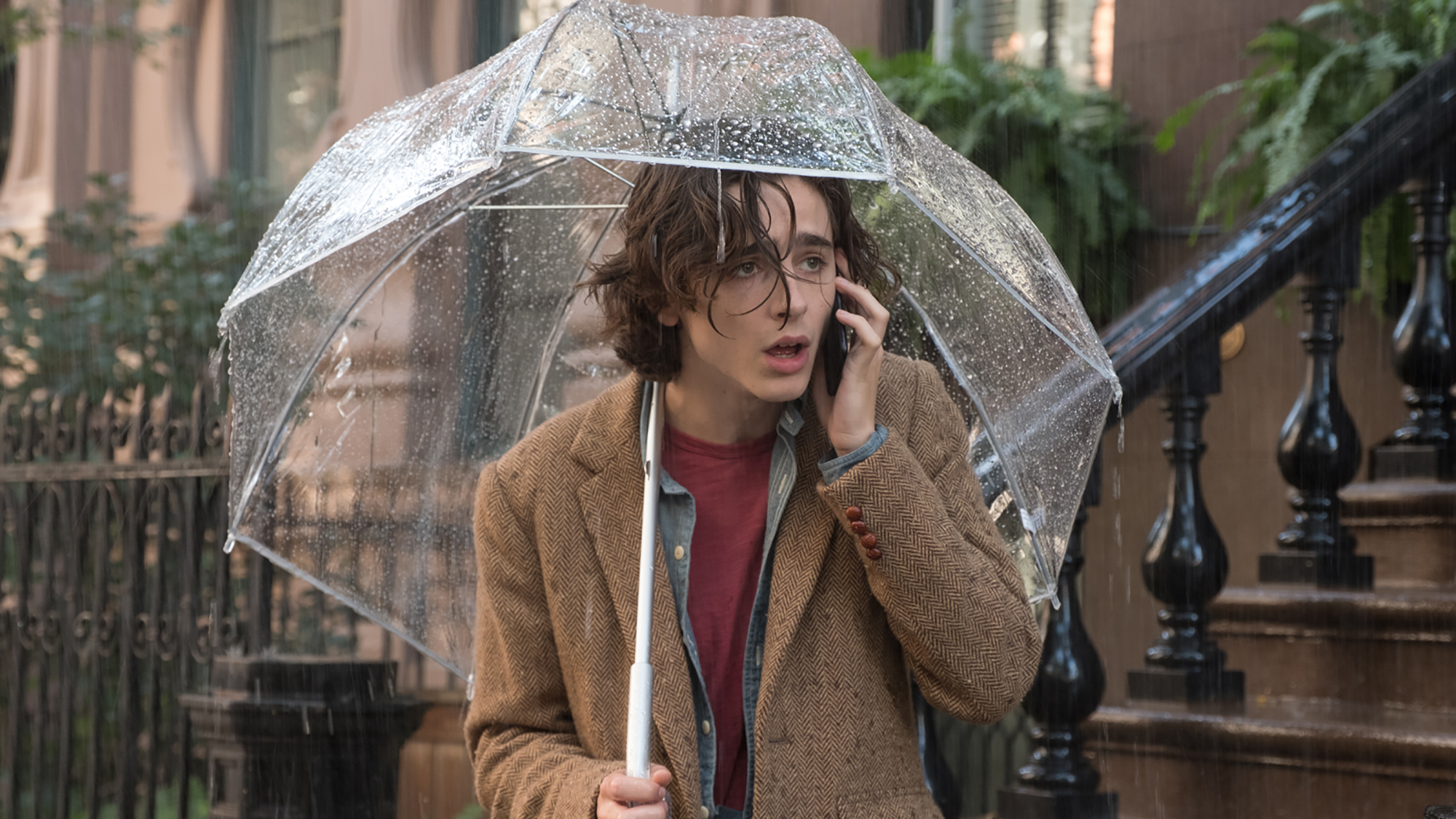 Woody Allen returns with his 49th film, A Rainy Day in New York, as two young lovers decide to spend a couple of days in New York City – although scattered showers are expected.

Stephen Sondheim once said that he couldn’t write a bad song. His boast meant that he had achieved a mastery of his craft where he could avoid the mistakes and keep the quality high. Not every song would be great but, like a chess master, he’d never lose a game because he fluffed a move. With A Rainy Day in New York, Allen is similarly strolling easily in his well-worn hushpuppies towards competence: not great, not hilarious, but not terrible or awful either.

Timothée Chalamet and Elle Fanning play Gatsby and Ashleigh, a young ‘don’t you just hate them they’re so beautiful’ couple from a liberal arts college, who head to New York when Ashleigh gets the plum assignment of interviewing movie director Roland Pollard (a barely conscious Liev Schreiber) for her school newspaper. Gatsby sees it as a perfect opportunity to show his Arizona beauty queen the culture and romance of the Big Apple but soon finds himself at a loose end as Ashleigh gets waylaid first by the director, then the writer Ted Davidoff (Jude Law) and finally the actor Francisco Vega (Diego Luna). He bumps into old acquaintance Chan (Selena Gomez), and a romance sparks even as the clouds gather overhead.

Chalamet does a wonderful Woody Allen impersonation, but one who is crucially stuffed with white privilege to go along with the easy charm and metrosexual charm. He wins at high-end poker games even when he’s not paying attention. One has the feeling if he really was Jay Gatsby he’d marry Daisy Buchanan and his assassin would trip and drown in the swimming pool. Fanning makes a game fist at putting some warmth and verve into her ‘dumb blonde’ caricature. The rest of the ensemble provides a deep bench of acting talent. And the film looks beautiful, with Vittorio Storaro making the most of his New York locations and high-end luxury hotel suites and apartments. The story has a comforting familiarity to it, like a well-worn truism or comfortable cardigan.

Unfortunately, there are just no real zingers. When in Annie Hall, one of Albie Singer’s dates doesn’t get his joke, you realise he should be with Diane Keaton. But here, when the same thing happens to Gatsby, it just means the joke wasn’t that funny. The key might be that Allen’s humour was originally rooted in anxiety and neuroses and Gatsby hasn’t even got first world problems: he’s got ‘One Percent’ problems. Fanning’s Ashleigh would be barely forgivable in a pre-code screwball (on second thought, that’s a real disservice to one of the richest seams of American film comedy). Rosalind Russell would have kicked this film down the stairs if she’d been offered the part.

In the end, the clue is in the title. If this was on television and there’s only racing on the other side, you’d stick with it. It’s a rainy afternoon film that passes the time pleasantly.

A Rainy Day in New York is released on digital platforms on 5 June.