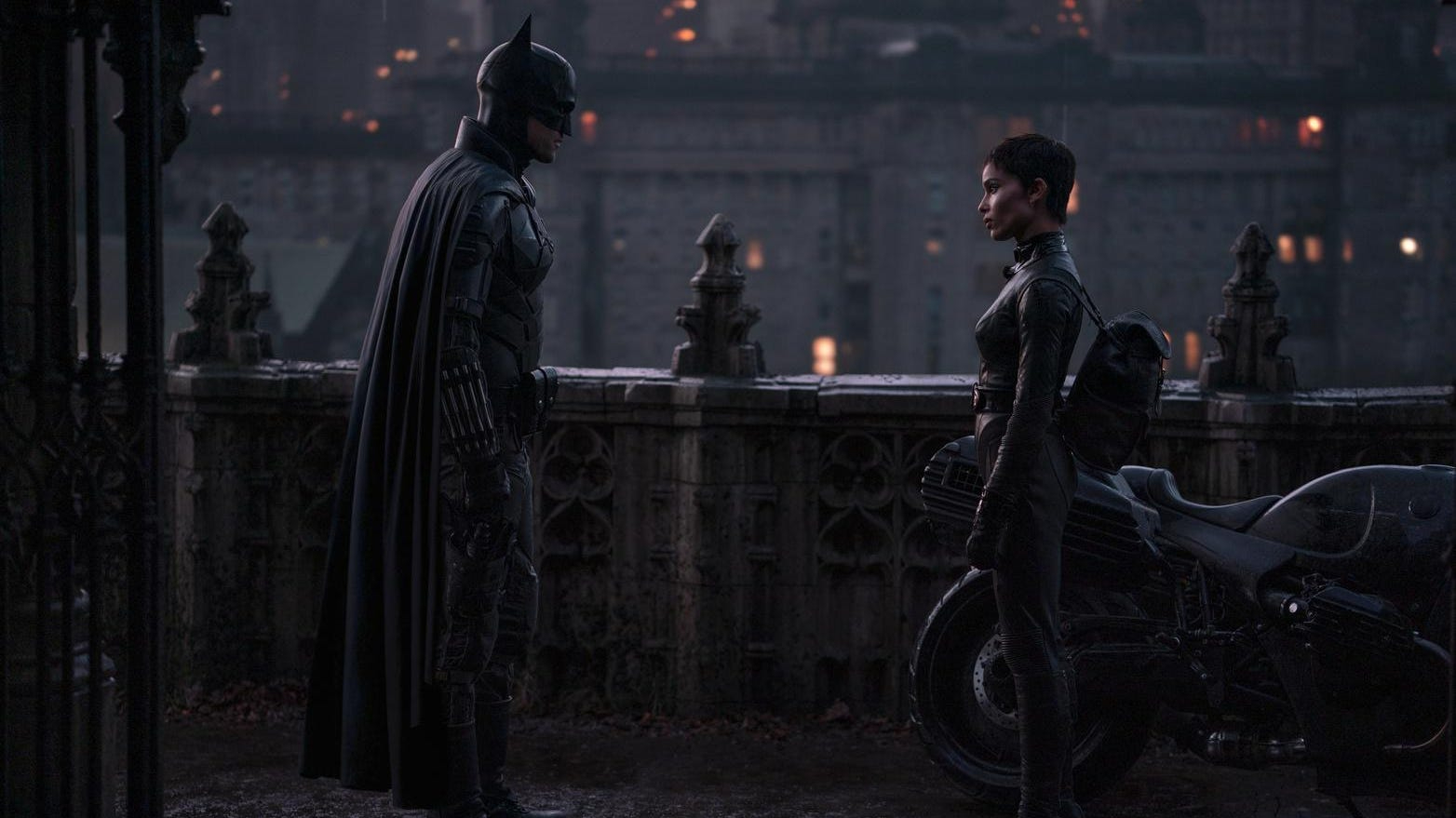 Robert Pattinson’s Bruce Wayne dons the cape and cowl to wreak vengeance on the city that took his parents’ lives, and in the process take down the Riddler (Paul Dano), Penguin (Colin Farrell) and Carmine Falcone (John Turturro). Matt Reeves’ The Batman is just as moody but twice as smart as previous iterations, while Pattinson gives us the most satisfyingly psychotic performance yet as the caped crusader.

Two years into adopting his Batman alter-ego, Bruce Wayne is fighting crime on the mean streets of Gotham. His burgeoning partnership with Lt. James Gordon (Jeffrey Wright) comes in handy when a serial killer known only as the Riddler starts offing Gotham’s great and good before exposing their misdeeds to the public eye. Wayne’s investigations cross the path of Selina Kyle (Zoë Kravitz), a cat burglar with connections to the Falcone mob as he uncovers a criminal conspiracy that will expose the endemic corruption at the heart of the city’s society.

Rain-soaked, labyrinthine and filthy, The Batman is a feast for the eyes, featuring the most magnificent realisation of Gotham since the days of Anton Furst. Reeve’s film is to 1980s-era comics as Burton’s art deco was to the 1940s, while Michael Giacchino’s score perfectly distils a dark, brooding tone. Batman’s opening voiceover narration, too, owes a debt to Watchmen’s Rorschach, an allusion that keys us in to the gaping disconnect between what Wayne thinks of himself and the reality of what he is. The Batman also invokes the voyeurism and subjectivity of 1970s cinema. POV shots of figures spying on their targets connect the hero and villain, while Wayne’s high-tech contact lenses and emo eye shadow signal a fascination with sight and vision that reminds us that Wayne is an unreliable narrator.

Cinematographer Greig Fraser’s camera tilts, inverts and reflects perspectives with mirrors, distorting the geography of scenes through a never-ending deluge of rain, that culminates, literally, in a biblical flood. This disorientation transforms Batman from a guy in a suit to a hulking monster. Neither as overtly gothic as Keaton nor as aerobatic as Bale, he stalks his quarry at ground level with a gait more akin to Michael Myers than a costumed superhero. An inverted shot of Batman slowly advancing on Penguin’s crashed car is sure to become as iconic an image of the Dark Knight as his usual perch atop gargoyles.

Pattinson is utterly convincing as a cosseted lunatic acting out his ideations of revenge on unsuspecting street thugs, a fantasy that he calls “the project”. It is perhaps the best performance of the live action Batmen to date and certainly the most intense. Pattinson’s face is like a haunted shadow, housing sunken eyes atop cheekbones so sharp they threaten to pierce the skin. Though he wears a mask supposedly to hide his identity he does very little to modulate his demeanour between his alter-egos; indeed for a character defined by chiaroscuro duality, the gradations between Wayne and Batman are near indistinguishable.

There’s a wonderful irony to Pattinson’s embodiment of the role, in that Wayne himself is playing a part. He is hopelessly naive at times and for “the world’s greatest detective” – a moniker uttered here in mockery – misses some clangingly-obvious clues, all the while inattentive to his own grotesque wealth and power. In many ways, Batman is no more than a little boy meting out vengeance fantasies on a city whose misery and suffering is subordinated in service of his own violent emotional needs.

Indeed, his battle armour, his stalking through the shadows, his lawlessness – even his amateur sleuthing – are all the fantasy projects of a child. They are also the fantasies of a fascist who fetishises suffering and sees corruption everywhere yet fights to maintain systems of power. The Batman tackles this endemic feature of the character through his pursuit of Paul Dano’s self-important Riddler, in a Se7en-esque game of cat and mouse that leads Wayne to the realisation that the pair are almost indistinguishable in their crazed projects of violence. The reimagining of The Riddler as a psychotic incel-type with an online following is timely and offers an interesting riposte to Todd Phillips’s Joker.

Elsewhere, Kravitz is brilliant as Selina Kyle – one of only two women in this ultra-macho film – though her part feels both a touch underwritten and somewhat superfluous to the main plot, adding to the overlong almost-three-hour runtime. And while the romance between Wayne and Kyle sizzles, it never fully ignites. Colin Farrell is tremendous fun too as the Penguin, chewing scenery under layers of prosthetics like a balding, latter-day De Niro.

The Batman is too long and despite gesturing in the right direction, doesn’t go far enough in interrogating the central premise of cheering on a billionaire super-cop who smashes poor people into concrete. Still, if one pulls on that thread too hard then the whole thing falls apart and, despite its flaws, Matt Reeves has marshalled one of the smartest and most mature comic book adaptations in memory. The film is strongest in its first half but the double act between Wright and Pattinson sustains throughout: never has the Bat-Gordon partnership been so well-realised. Inevitably the door is left open for sequels, but The Batman stands up as an incredibly satisfying, grown-up vision of its own.