There’s been a slew of themed film events cropping up in the past decade: quirky, unique evenings filling the void left by soulless, sticky-carpeted multiplexes, one of the most prominent being the Jameson Cult Film Club (JCFC). The Irish whiskey brand have made it their mission to be a friend to cinemagoers, sponsoring the Dublin International Film Festival and the recent Empire Magazine Awards, and their Cult Film Club, now in its fourth year, is going from strength to strength.

The first ‘future cult’ film in the screening series was Morten Tyldum’s Norwegian thriller Headhunters (2011), which has been generating plenty of festival buzz over the last year. It’s a superb art-heist thriller, full of twists and turns, which thankfully will be getting a UK release on April 6. Fittingly for a film about high-profile art theft, this screening was in one of the rooms at the Saatchi Gallery in Chelsea.
Prior to the film, the Jamesons flowed freely, around six hundred attendees were treated to some ‘living art’ installations, in tribute to the film. Two enormous bearded Norwegian policeman stood guard at the entrance, and a bloodied corpse, lying in a bed, cheerfully accepted photo opportunities. A distinctly non-Saatchi painting was swiped from the wall by two balaclava-clad thieves, also only too happy to have their picture taken. 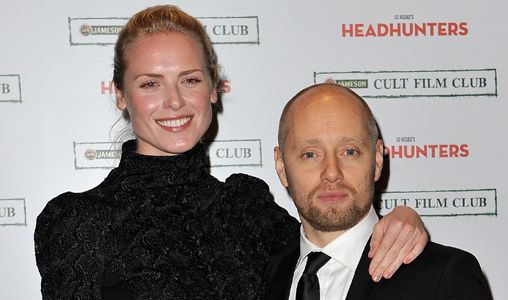 Headhunters went down a storm, and a brief Q&A followed with the film’s stars – Askel Hennie and on-screen wife Synnøve Macody Lund, plus producer Marianne Gray and compere Chris Hewitt. Hennie proved to be charismatic, charming and bursting with excitable energy, admitting that the evening was something of a ‘dream’: “I have a Saatchi book of art on my coffee table at home, and here we are!”

Hennie spoke enthusiastically about the grisly scene where he is forced to hide in a pool of feces in an outhouse; apparently movie poo consists of ‘granola, chocolate, olive oil, bread crumbs and other chocolate things’. The inevitable question of the English-language remake came up, to audible disgruntlement from the audience, but Gray was quick to point out that the Hollywood incarnation will be going from Jo Nesbø’s original book, rather than the Norwegian script.

She also revealed that Mark Wahlberg was interested in playing the lead, at which point Hennie recounted how his not-particularly-streetwise director, Morten Tyldum, “left Marky Mark hanging”. Apparently, during an LA meeting, the star went in for a fist-bump and Tyldum walked away, bemused.

It also emerged that the beautiful Lund is a film critic in her native Norway, and that Headhunters is her debut film – an astonishing performance for an amateur. “There’s hope for me yet,” joked film critic and compere Hewitt.

Headhunters is released in UK cinemas on April 6, and we’ll have a full review live on the site in the near future. For more info on the Jameson Cult Film Club, visit jamesoncultfilmclub.com.