Short films rarely get the attention they deserve, but last night at London’s Film Museum, Empire Magazine and Jameson put paid to that with their Done in Sixty Seconds filmmaking contest. Now in its fifth year, the concept is to distill a film into a 60 second short, easily said but very difficult to achieve. This year the competition flourished with literally hundreds of entries from as far afield as Kazakhstan, Turkey, Chile, Sweden and the Netherlands, all with the hope of winning and then attending Sunday’s Jameson Empire Awards.

The 29 chosen finalists who attended last night’s event had to face the scrutiny of a judging panel that included The Sun’s Alex Zane, Empire’s editor-in-chief Mark Dinning, comedian Chris O’Dowd and Monsters (2010) director Gareth Edwards, who would whittle it down to just five. The quality of the films was outstanding and demonstrated that now – due in part to the affordability of the technology – people can turn a film idea into reality relatively cheaply and still create something impressive. 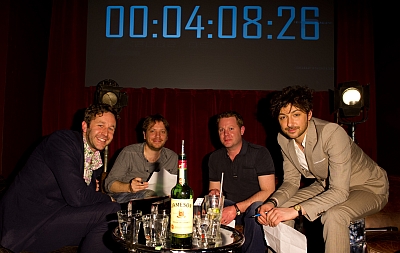 All the entries were enjoyable, managing to make those gathered laugh, think and hold their breath at the remarkable talent that is evidently out there, with riffs on Raiders of the Lost Ark (1981), Black Swan (2010), The King’s Speech (2010) and The Godfather (1972). This was not a group of young amateurs sitting in their bedrooms playing around with Apple Final Cut, but a host of young, talented future film directors. The Russian entry, distilling Michael Bay’s 2007 blockbuster Transformers, was particularly impressive for both its CGI and its humour – although more worryingly there seems to be a lot of spare guns and tanks in Russia.

Due to the high quality of the shorts, it must have been a difficult task for the four judges to choose just five finalists from 29, but choose they did. The five selected included District 9 (2009), Black Swan, Spider-Man, Edward Scissorhands (1990) and Phillip Askins’ UK entry Herge’s Raiders of the Lost Ark (the video can be viewed at the bottom of this post). Askins remarked, “I’m speechless; it’s a huge honour to represent the UK at the Jameson Empire Awards as one of the global Jameson Empire Done in 60 Seconds finalists. Come Sunday I’ll be meeting the people who inspired me, which is crazy. This is a big moment for me; I want to thank everyone at Jameson and Empire for giving me this opportunity.”

The finalists will all have to wait until Sunday’s Jameson Empire Awards to find out who the 2012 Done in Sixty Seconds winner is going to be.

For more info on the Done in Sixty Seconds competition and the Jameson Empire Awards 2012, visit empireonline.com/awards2012/diss.