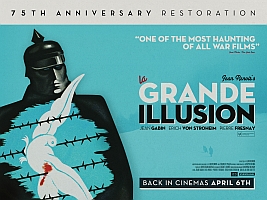 Jean Renoir’s monumental 1937 masterpiece La Grand Illusion returns to cinemas this week for its 75th Anniversary, providing an opportunity to see one of the finest French films of all time. It’s easy to gush about Renoir’s classic; it won at the Venice Film Festival upon release and was the first foreign language film to be nominated for an Oscar. The critical reception and accolades aside, La Grand Illusion is simply an extraordinarily well-made film that tackles a difficult subject, especially considering the political context of its release.

The film follows the story of two French fighter pilots during World War I from radically different social backgrounds; the debonair and aristocratic Captain de Boeldieu (played superbly by Pierre Fresnay) and the working class hero Maréchal (Jean Gabin). The two pilots are shot down on a reconnaissance mission by German pilots, captured and imprisoned in a prisoner of war camp. Once established in the camp the two heroes soon begin plotting their escape with a band of fellow prisoners. Failing in their attempts they are sent to the mountain fortress of Wintersborn where only a final act of bravery by the noble de Boeldieu can save them. 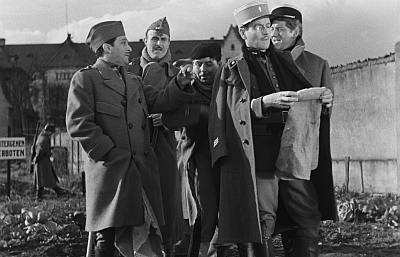 La Grand Illusion’s qualities are numerous, but what initially stands out is the treatment of the political and sociological themes by Renoir, who co-wrote the film with Charles Spaak. Neither of the writers back down from controversial issues of class relationships, expertly dealt with through the tense relationship between de Boeldieu and Maréchal, demonstrating the radical shifts that occurred during WWII which resulted in the ultimate decline of the aristocracy.

The film also tackles international relations, drawing upon characters from all over the world and showing the possibility of camaraderie despite different racial, social and economic backgrounds. Critics may have praised the film’s anti-war message but it also drew the attention of Joseph Goebbels, who seized all prints in captured territories during the war, and it was even banned in France until the end of the conflict. It’s not hard to understand the fear; the futility of war is laid bare, and the film also tackles anti-Semitism in the character of the wealthy and generous Jew Rosenthal (who is shown in a radically positive light for the time).

Importantly, as well as making a serious commentary on the condition of Europe,  La Grand Illusion is also remarkably funny. The humour of drag-cabaret scenes and use of gallows humour in the camp is incredibly enjoyable. All performances are strong, particularly Erich von Stroheim’s role of the German camp-commandant von Rauffenstein.

One could continue to wax lyrical, but no words can quite capture the skill employed by Renoir here. La Grand Illusion is nothing short of an excellent film with an insightful commentary on a rapidly changing Europe ravaged by war.