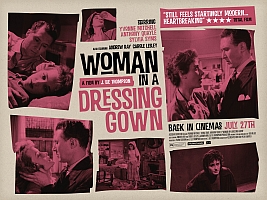 Available to own on DVD for the first time since its cinematic release back in 1957, J. Lee Thompson’s Woman in a Dressing Gown hints at what was to come from the British New Wave of the 1960s, with its realistic portrait of the breakdown of a marriage on a post-war London council estate. Amy (Yvonne Mitchell) is a hopelessly lost house wife, whilst her husband Jim (Anthony Quail), frustrated with his spouse, falls in love with his secretary Georgie (Sylvia Syms). When Amy discovers the affair her world falls apart and she attempts to win back Jim’s heart.

Woman in a Dressing Gown is incredibly modern in its realistic approach to depicting marital relations, whilst the frustration of being a working-class woman in the 1950s is also handled with care and thought. The daily routine which Amy struggles with is tinged with melancholy that haunts every scene, with the true reason behind her sadness only revealed in the final act. Mitchell captures the bedraggled Amy perfectly, inspiring both pity and frustration in this emotive and painful drama. Equally, audiences will find sympathy with Jim, who struggles not only with his wife but his life wanting more but it always being just out of reach. 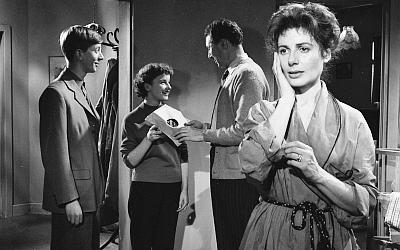 Often pigeon-holed as a working class take on David Lean’s Brief Encounter (1945), Thompson’s film is made all the more interesting by its focus on feminist ideas. Women are expected to cook, clean and live for their husbands, with little time for themselves. This is a story that picks up on the period of transition in Britain at the time that was yet to explode into the feminist and sexual liberation of the 1960s. The tragedy of Amy is that she wants more than anything to please Jim, yet is unable to be the perfect housewife that he wants her to be.

The film’s complex central relationship is beautifully handled through some extremely well-written dialogue, which is delivered with poise and accuracy. This is just one string to Thompson’s heartbreaking bow, and establishes Woman in a Dressing Gown as a powerful drama that speaks volumes of the small personal tragedies of everyday life that so often go both unspoken and unnoticed.