Ron Scalpello’s debut feature Offender (2012), released in UK cinemas this week, is a gritty, ultra-violent tale of life inside a young offenders institute. Taking the lead as damaged protagonist Tommy is 23-year-old Joe Cole, a regular TV actor having appeared in the popular teen drama series Skins and crime mini series Injustice. Accompanying Cole is Evening Standard ‘Outstanding Newcomer’ Malachi Kirby (also starring later this year in My Brother the Devil) as Tommy’s cell-mate, Harry. CineVue met up with the two stars of the film to discuss their roles.

Joe Walsh: First of all, what attracted you both to the respective roles?

Joe Cole: For me it was a real emotional white-knuckle ride with a lot of emotional depth to the characters. For an actor in my playing range, in his 20s, that sort of age these roles are few and far between. So when it came up it was a case of making sure that I was really prepared for the auditions and doing my best, because it was a real stretch. For me it was a chance to show something of what I can do.

Malachi Kirby: It is the same case for me with the character. There was so much depth to each character and I don’t think that there was a character in there that didn’t need to be there. Everyone had his or her story to tell. That is something that I think is very rare in film scripts. My characters journey was also something I loved, because he had an inner strength that is beautiful, he is in a place where he is very vulnerable but he wasn’t a victim- he held his own albeit not physically. That is a really interesting character to play.

JW: How did you both find the transition from acting on television to acting on film?

JC: My experience is that it is not too dissimilar. The main thing that I did previously was Skins and the big difference with this was that it is was a very masculine set. It was testosterone filled, which it had to be being a prison film. That for me it was the only real difference, other than that it is very similar. 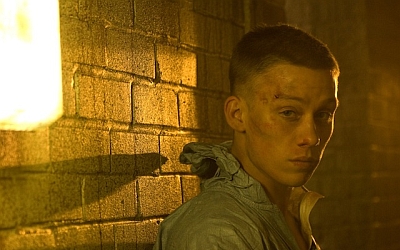 MK: I found that you get more time in terms of being on set and rehearsals. I got to talk to the director a lot more about what he wanted from the character, it just isn’t so rushed. My experience from the only other film I did, My Brother The Devil (2012) both of them were first time directors so their passion for the film was a great thing to share in. Where as in TV it is more like work.

JC: That’s true, because with this film it was a real labour of love for all of us. In the film you have actors, you have rappers, young ex-offenders and the rest. We all came together and it worked. When you are working with people who care I noticed early on this level of excitement, particularly from the crew. That buzz went through to the final day we worked on it.

JW: Do you find that there are more opportunities for young, up-and-coming British actors to progress in film at present?

MK: I think to make the transition the opportunities are definitely out there – you don’t even have to be an actor these days. There are loads of opportunities with things like you theatres and street casting. There is a lot of that going on at the moment, like what Joe said, they even will go to young offenders, just different young communities looking for talent. If you are really passionate about it you will find where the opportunities are.

JW: Were either of you worried at all that Offender may appear to glorify violence?

JC: I don’t think that it does really, especially when you see how it all pans out. It is quite tragic and there are good points and bad points, but I think they have the balance right there. It is violent but it is necessary from the film.

JW: What do you want people to take away from the film?

JC: I would like people to enjoy Richard Mott’s incredibly claustrophobic but brilliant cinematography, but also I think what audiences are going to get is a real smack in the face. Which is what we are trying to do, we want people to be excited and come out of the cinema feeling different to how they came in. I hope it impacts on people.

Offender is released in UK cinemas nationwide this week. Read our review of the film here.