Alejandro Jodorowsky’s Santa Sangre (1989) is the ultimate example of cult cinema that transcends its meagre cultural standing- an avant garde horror with all the surreal twists of a vivid and harrowing nightmare, played out in an assured and intelligent manner. Based around the lingering repercussions of adolescent trauma, Santa Sangre follows Fenix (played by Jodorowsky’s two sons – Adan, in his youth and Axel in his later years) a young man tormented by the graphic violence he witnesses as a young boy.

We first meet Fenix in a mental institution, perked up high on a tree like the eagle tattoo that emblazons itself on his chest. Through a collection of flashback we learn of his youth in the circus where he grew up as the son of a knife thrower and trapeze artist. When Fenix’s father is unfaithful with a tattooed woman, his mother exacts her revenge, losing both her arms in the process – an incident that sends this young man into a comatose state of shock. Back in the modern day Fenix’s mother rescues him from his solitary confinement but does she has an ulterior motive behind her actions? 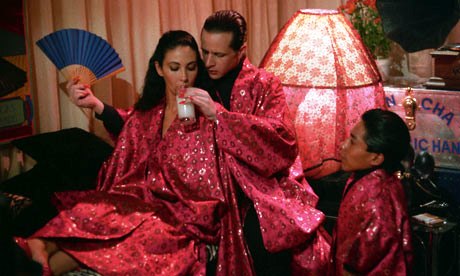 Luis Buñuel once referred to Jodorowsky as a “commercial surrealist”, a derogatory term which should be celebrated rather than condemned. With Santa Sangre, Jodorowsky has achieved the near impossible, creating a surrealist nightmare of a film with a coherent narrative that never relies on its outlandish visuals to mask any narrative shortcomings or plot holes. This isn’t to say there won’t be audience members unable to relate to the film’s scene of an elephant’s coffin being plundered by a group of ravenous peasants. However it’s the intelligent manner in which Jodorowsky embellishes his fascinating story with such vivid imagery which makes Santa Sangre such a resounding success.

Genuinely condemning evil rather than romanticising it, Jodorowsky’s kaleidoscope of psychedelic images provokes a strong reaction to the film’s cultural message – all played out within his familiarly restrained framework of religious iconography and phallic imagery. It’s these unsubtle, yet intriguingly ambiguous metaphors for everything from the role of horror within cinema to the sexual empowerment of women which makes Jodorowsky’s most critically acclaimed work so watchable, demanding multiple viewings to truly understand everything which occurs in the film’s chaotic mis-en-scene.

The regularity in which Santa Sangre presents its madness and hallucinogenic visions creates an intoxicating example of experimentalist surrealism that delves into the deepest recesses of the soul to present a visually alluring depiction of the Freudian horrors that consume the subconscious. From the chorus of clowns who often accompany the action to the dark ominous atmosphere which is reminiscent of Georges Franju’s films, Santa Sangre is a strange, violent, yet totally immersive experience – a fantastic example of cinema which will undeniably stamps its vibrant images into the forefront of your mind.