Starring Academy Award-winning actress Melissa Leo, Brian M. Cassidy and Melanie Shatzky’s Francine (2012) is a surprisingly provocative piece of stripped-down social realism that’s subtle approach belies its powerful core themes. After serving time in prison for an undisclosed crime, Francine (Leo) begins to rebuild her life in a small American town. Her new home is as stripped of identity as she is, however, she finds comfort in the nature which surrounds it. She takes a series of jobs, all of which revolve around animal care but fails to hold any of them down due to her struggle to engage with other people.

Social ineptitude has left Francine lonely, and despite her best attempts to connect with others, she simply can’t – instead turning to the unconditional love of the local stray cats. This reliance on animals for company soon becomes an obsession, with Francine’s home quickly overrun with a collection of stray and stolen pets. However, much like her relationship with humans, Francine is unable to reciprocate the love her furry companions give her, with her house rapidly becoming an abhorrent mess – with the health and well fare of these pets deteriorating at the same alarming rate of her escalating depression. 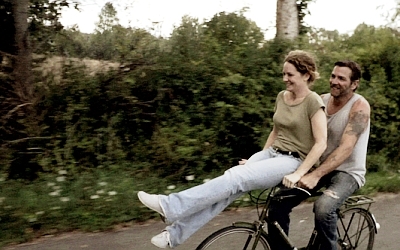 Directors Cassidy and Shatzky have created a fascinating portrait of a detached individual struggling to reintegrate into society. Using a collection of uncomfortably invasive close ups and voyeuristic over the shoulder tracking shots, the pair have managed to immerse the audience into Francine’s insular world, whilst also making the viewer feel as isolated from the surround community as she is. Providing no back story of who Francine is, or where she comes from, there’s a lingering air of intrigue which seems to follow her – making us even more fascinated by this fragile soul, who throughout her increasingly emotional state of despair looks like breaking at any moment.

Francine hinges on Leo’s performance, with her character’s redemptive journey requiring an ability to be appear both child like and innocent whilst damaged and disturbed. Completely laid bare for the camera (at one point literally – in a scene which depicts the beginnings of her rebirth into society) Leo is tremendous, delivering a powerful physical performance which remarkably manages to display Francine’s inner trauma’s despite her cold, hard exterior.

Tracking an ex convict through her redemptive journey, Francine instantly draws you in, constantly threatening to steal the protagonist away from the viewer whilst they remain hopeful (against all better judgement) that she’ll eventually break through her self-imposed walls of detached solitude and build a life for herself. Francine is a delicate film which lingers in your mind for much longer than first anticipated.