In competition at this year’s Cannes Film Festival, South Korean director Hong Sang-soo returns with In Another Country (2012), a carefully crafted, slight whimsical comedy that isn’t particularly funny and has nothing new to say. A young girl is stuck with her mother at a seaside town as they have stood guarantor for an uncle who has gone missing. On learning of their predicament, the young girl decides to write three scripts, each one featuring the visit of a French woman (Isabelle Huppert) to the small boring little town.

In the first, Huppert plays Anne, a famous film director visiting married friends who are expecting a child. The wife is jealous and suspicious and perhaps with reason, as there are hints that something has gone on between Anne and her husband. Anne also meets a young lifeguard and they engage in some ‘funny’ banter, before he invites her into his tent to sing her a song. 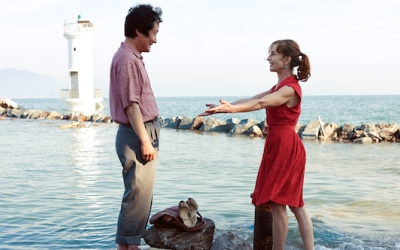 In the second episode, Huppert is visiting the town in order to meet a famous Korean film director with whom she is having an affair. He is late and as she kills time waiting for him she meets the lifeguard. Cue ‘amusing’ discussion about visiting a lighthouse, “Oh you mean a lighthouse, no I don’t know where it is.” The director, when he does turns up, is understandably jealous. Finally, third episode sees Huppert play a single woman whose husband runs off with a Korean man.

The universal themes that run through Sang-soo’s In Another Country’s episodes are clear: jealousy, desire, types of Korean men, relationships between Korean men and French women and the difficulty of communicating in a language which is not the first language of either interlocutor (the film is mostly in English with some Korean). However, none of the characters are interestingly drawn, the acting is truly poor – even from the usually impeccable Huppert – with a lot of embarrassing moments that play like poorly-prepared improvisation.

The whole concept of scripted artifice is a poor excuse to something so badly made as Sang-soo’s In Another Country. It’s almost impossible to believe in the characters, the setting or the world; in fact, the only thing you are truly convinced of through the entire film is that the screenplay probably was written by a bored young girl – and she clearly didn’t do more than one rough draft.