As they might say in Mexico, Casa de mi Padre (2012) is something of an “excentricidad”. Quite unlike the big budget, big star, cameo-filled, broad-appeal comedies Will Ferrell is best-known for, Casa de mi Padre was made for just $6m, and barely scraped that back at the box office. Matt Piedmont’s oddball comedy is, if you will, the non-union Mexican equivalent of a Ferrell flick.

Almost entirely en Español, with English subtitles, this tongue-in-cheek pastiche seemed bound to confuse as much as amuse, straying so far from the tight boundaries of Ferrell’s ‘Frat Pack’ fellowship. If anything, it shares more in common with the knowing, continuity-be-damned spoofs of Zucker-Abrahams-Zucker’s classic output, in the way it cheekily parodies the cheap ‘n’ cheesy filming practices of Mexploitation B-movies and telenovelas so beloved of America’s neighbour to the south. 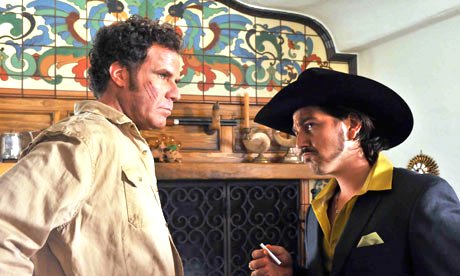 To his credit, Ferrell – not an actor known for subtle, nuanced performances – plays it largely straight, aware that spoofs require a deadpan rendition in order to amplify the all-round absurdity. And absurdity this film has in abundance. Ferrell plays Armando Álvarez, a lowly rancher who lives a quiet life with his disapproving father. When his drug-dealing brother (Diego Luna) returns to seek refuge from a crime baron (Gael García Bernal), hot señorita in tow (Genésis Rodríguez), proceedings get appropriately loco.

Casa de mi Padre’s deliberate naffness is entertaining to a point. Clunky dialogue, shoddy animal props and cheap fake sets inter-cut with real Mexican landscapes make for an enjoyably daft experience. Unfortunately, long stretches of time pass where comedy seems all but disregarded. Plot is usually plays second fiddle in these sorts of movies if the gags are strong enough, but the filmmakers neglect this notion, bizarrely attempting to give the hokey narrative some unwarranted dramatic weight. Thus the tone hops around like a Mexican jumping bean: we sit through puzzling grim-faced dialogue one minute, and observe a ludicrous sex scene of stubbly arse-groping the next.

Prior to movies, Piedmont and Ferrell wrote sketches together on Saturday Night Live, and that’s exactly what Casa de mi Padre appears to be: a five-minute sketch kneaded too far thinly into a 90-minute movie. The concept is strong. The tacky target is ripe for ridiculing. The jokes often land, and are funny, but the script and execution is underdeveloped. Or, as they say in Mexico, “subdesarrollado”.