The surprise winner of last year’s Academy Award for Best Documentary Feature, T.J. Martin and Daniel Lindsay’s real-life underdog tale Undefeated (2011) proves as worthy of the accolades as the team upon which it focuses. Combining emphasis on the people instrumental in this American football team’s successes with high drama in the tightest of contests, it is a moving and compelling tale. For those not football-savvy, fear not; it requires little in the way of NFL nous to thoroughly enjoy it. The film picks out three particular players’ stories from amongst the Manassas Tigers’ school football team and keeps them constantly in play.

However, it’s the coach, Bill Courtney, that Undefeated gravitates towards. Having already coached the side for five years, the documentary follows them all through a nerve-wracking season that will see several star players graduating from school and thus leaving the squad. It feels, to everyone involved, like it is now or never for this underprivileged school’s hopes of winning a play-off game for the first time in its history. 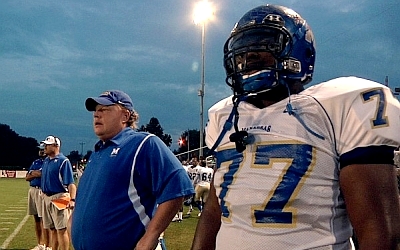 However, in an area of Memphis that is struggling economically, with a team the majority of whom have a parent that has spent time in jail, his real fight is persuading these disillusioned kids that they are capable of achieving things. With precious little money to their name, the Manassas Tigers have, in previous years, been loaned out as pre-season training fodder for more wealthy and successful schools. Suffering humiliating defeats before the season is even underway has served to undermine any self belief they have; and this is what Courtney must reinstate.

Undefeated’s title refers not necessarily to the sporting prowess of the Tigers but to their attitude, inspired by their coach. Naturally there are ups and downs in any season, but witnessing the trials and tribulations of these players, both on and off the field of play, helps to imbue their sporting achievements with additional emotional heft. When it comes down to the all important games, they are gripping because you cannot bear the thought of these boys losing.

Given how watchable the younger characters are, it is a shame that quite so much of the running time is spent with Coach Courtney, but his home and work-life balance (or lack thereof) brings some extra drama and his dedication to these boys – both sporting, academic and in their home lives – is truly touching. Regardless of how it all turns out when the clock reaches zero, Undefeated proves a thrilling and moving ride.