With Polish recently declared the most widely spoken non-native language in England and Wales, the timing seems perfect for a UK-based celebration of the country’s cinematic expression. The annual Polish Film Festival, Kinoteka, is in its 11th year now and will be running during March; primarily in London with screenings Continue Reading

★★★★★ Twenty-five years on from its initial release, Rob Reiner’s The Princess Bride (1987) has lost none of its ability to enchant. Adapting his own novel, William Goldman toned down the post-modernism of the book, but enhanced its buccaneering adventurousness and swooning romanticism – whilst retaining a hearty dose of Continue Reading

★★★☆☆ In his feature debut, Babeldom (2012), award-winning British experimental animator Paul Bush has made an old-fashioned visual essay exploring the very concept of a city. Referencing the biblical ‘Tower of Babel’, the film numerous incorporates images from London, Dubai, Berlin, Shanghai, Barcelona and Osaka, to build up a palimpsest Continue Reading

★☆☆☆☆ A made-for-TV action movie with made-for-TV special effects and an A-list cast, Fire with Fire (2012) has the worst star to quality ratio of any film since Movie 43 (2013). Josh Duhamel (who was in that too), Bruce Willis, Rosario Dawson, Vincent D’Onofrio and Curtis ’50 Cent’ Jackson couldn’t Continue Reading 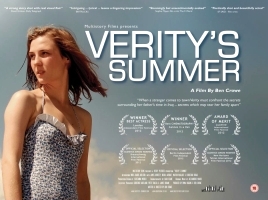 ★★★☆☆ Hard on the heels of Zero Dark Thirty (2012), Kathryn Bigelow’s harsh look at the US military’s use of torture in their hunt for Osama bin Laden, comes a British film reflecting on the UK’s own murky dealings in Iraq. Verity’s Summer (2013), written and directed by Ben Crowe, Continue Reading

★★★★☆ This warm and comforting American comedy-drama, set in a near future where android helpers have become a staple of healthcare, presents not only a cosy viewing experience, but also makes several interesting observations about man’s relationship with machines and technology. A ‘comedy’ in the sense that Alexander Payne’s films Continue Reading