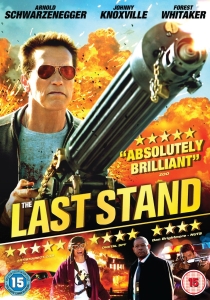 Over the past few years, a trend has emerged that’s seen action stars of yesteryear tooling up once more to riddle bad guys with bullet holes and quip to their heart’s content. Spearheaded by The Expendables (2010), this new sub-genre isn’t interested in papering over the multiplying creases in the foreheads of its leading men, but wholeheartedly embraces them. After all, they not only allow for, but positively encourage all manner of jovial wise-cracking about being “too old for this shit”. The latest star to step back into the breach is ex-Governator Arnold Schwarzenegger in Kim Jee-woon’s The Last Stand (2013). 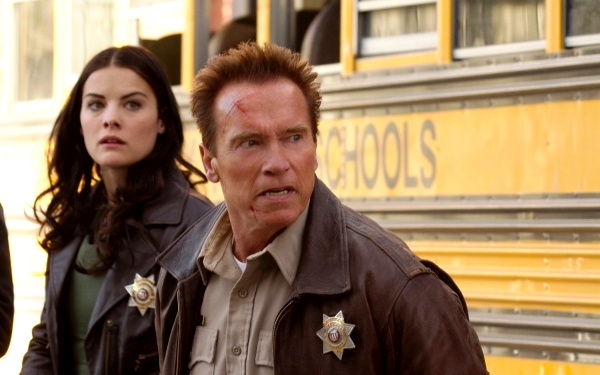 Already admired for his balls-to-the-wall action and stylish set pieces, the Korean director’s first English language feature sets up small-town sheriff Ray (Schwarzenegger) as the last line of defence against a dangerous gangster on the run. Gabriel Cortez (Eduardo Noriega) has escaped from the Federal custody of Agent John Bannister (Forest Whitaker) and is hurtling towards the Mexican border in a souped-up automobile. The majority of Sommerton Junction’s population have skipped town to watch the local school’s big football game, so Ray and his rag-tag band of police and local eccentrics use their home as one last roadblock for Cortez.

During it’s opening half, The Last Stand strangely lacks direction – given that its villain’s bearings are so pertinent and the plot is always making a beeline for the titular showdown. While its antagonist is keenly tearing south at hundreds of miles per hour, the film’s narrative ambles around introducing Ray’s back-up (Johnny Knoxville, Rodrigo Santoro, Thor’s Jaimie Alexander and Luis Guzmán) and Cortez’s subordinate, Burrell (Peter Stormare). There are some nice asides for car fans as the villain evades capture, but largely it feels like there’s an awful lot of filler before the main event.

When the face-off finally comes, it manages to be engaging enough with some impressive hardware made available to the amateurish cops before any obligatory chases or fisticuffs. Whether this will truly be a jump-start for ‘Ah-nald’s’ career we’ll have to wait and see, but it certainly pails in comparison to the Jee-woon’s previous Korean successes like A Bittersweet Life (2005) and The Good, the Bad, the Weird (2008). All in all, despite a few fun moments, The Last Stand will probably not be an especially memorable outing for anyone.