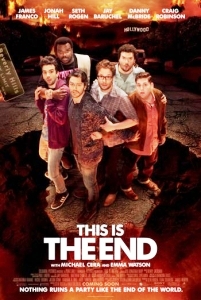 This (remarkably) is the way the world ends – not with a cataclysmic blast, but with an especially juvenile dick joke from a self-parodying James Franco. If this is your idea of a great night out, then This Is the End (2013) could just be the LOLpocalypse you’ve been waiting for. Evan Goldberg and Seth Rogen direct and star in in this tale of Hollywood’s finest final reckoning. Visiting LA for the weekend, Jay Baruchel is hoping for some quality bong time with Rogen, but winds up at a house party with Rogen’s new pals James Franco, Craig Robinson and Jonah Hill – whom he hates. To make matters worse, the entire planet is annihilated. 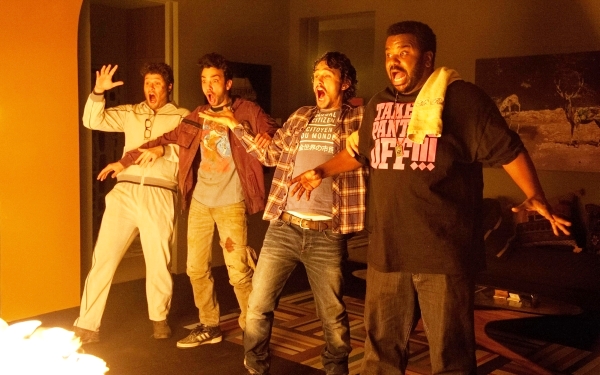 This Is the End is a veritable who’s who of the stoner fraternity, with much of the film’s pleasure comes from seeing them bounce off each other. Holed up inside Franco’s fancy pad, the group fight over Milky Ways, bitch behind each other’s backs and debate who should be sent out into the wreckage first. It’s a fun piece of bickering that suits the group’s semi-improvised style, and the ensemble cast clearly enjoy sending up their own personas (a coke-snorting Michael Cera is a joy to behold). It’s a shame, then, that we don’t quite enjoy it as much as them. Whilst watching Hill being lovely and Cera being a cock keeps you chuckling steadily at first, the unedited stream of blokey banter eventually starts to wear thin.

One uncomfortable rape joke (there are several) involving Emma Watson goes on for far too long, moving quickly from provocative to purely poor taste. “Hermione stole our shit,” wails Danny McBride after the feisty Watson escapes their male clique. You almost wish the camera followed her. Instead, we meander through This Is the End’s muddled third act that toys with salvation but never earns it; while the comic chemistry between the actors initially adds up, the bromance lacks the dopey heart of Pineapple Express (2008) or Goon (2011) to engage beyond the opening satire of superficial celebrity. Still, there are some amusing set pieces among the rubble, and Goldberg and Rogen’s vision of Armageddon is suitably absurd.

Most impressive of all is the much-maligned McBride, who’s responsible for several laughs (Danny McBride being funny in a film? Maybe it is the end of days after all). Sporadically entertaining but all over the place, Goldberg and Rogen’s This Is the End wraps up with a climax that nods heavily to nostalgia fans – a burst of 90s heaven that can’t redeem the flaws that have gone before. A comedy movie that doesn’t bring about the LOLpocalypse? It’s slightly disappointing, but it’s not the end of the world.