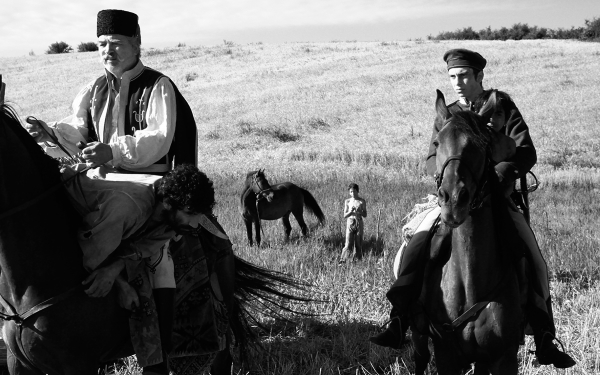 Radu Jude’s Everybody in Our Family (2012) was a critically revered, yet criminally little-seen comic satire about the fragile fabric of contemporary Romanian society. Jude’s follow-up Aferim! (2015) marks a noticeably tonal, if not entirely thematic, departure from the intimacy and immediacy of his previous work. Set in the southern Romanian region of Wallachia, in 1835, the film opens on a crisp black and white image of a cactus, before a widescreen shot reveals the film’s protagonists riding horseback across the horizon.

This feudal western about gypsy slavery unravels like an epic road movie through Romanian history; a deceptively funny and visually alluring enquiry into the roots of racism. Our guide through 19th century Romania is Gendarme Costandin (Teodor Corban), a crude, yet silver-tongued officer of the law. His persona lies somewhere between Nicolae Ceaușescu and Don Quixote, and he’s fittingly accompanied by his own Sancho Panza; his son and protégé, Ionita (Muhai Comanoiu). They’ve been employed by their local boyar to track and retrieve a gypsy named Carfin (Cuzin Toma), a slave who fled after being accused of having an affair with his master’s wife.

On their journey through the cholera stricken Carpathian steppes they encounter travellers and villagers from various backgrounds. From an outspoken monk, who recites an encyclopaedic tirade of racial abuse that covers nationalities and religions from across the length and breadth of Europe, to the patrons of a distant tavern brimming with drunken merriment. At every step Costandin bequeaths us with boorish jokes and misplaced wisdom, but as this father and son’s quest progresses we begin to learn that Costandin’s sense of moral decency might not be as wayward as his bigotry and misogynistic remarks suggest. There’s an endearingly craggy affability to Costandin, and the laughter that emanates from the audience’s reaction to his exploits raises a far bigger question; just how archaic is this form of humour? Jude and Florin Lazarescu’s script hands out its fair share of invectives, from labelling women as ‘hags’ and gypsies ‘crows’ to myriad highly offensive ethnic slurs. Whilst undeniably crude, this dialogue offers a shrewd look at the racist mentality of the period. Aferim! isn’t just meandering philosophical introspection, it looks magnificent too.

Cinematographer Marius Panduru’s sublime landscapes and the costume and production design of Augustina Stanciu and Dana Paparuz combine with Trei Parale’s traditional Romanian folk music to create a convincing and engrossing world, one where the incidental off-screen action is often as entertaining as the story itself. This all makes for a surprisingly jovial history lesson, one that draws on real accounts of gypsy slavery. It’s effectively a quest for answers, a voyage to understand the roots of racial inequality. “This world will stay on as it is,” Costandin tells his son towards the end of the film. “You can’t change it, try as you might.” Their journey itself shows how slow progress can be, yet there’s optimism to be found between the tragedy and comedy of the final moments. The title translates as ‘Bravo’, perhaps an ironic pat on the back to contemporary Romania’s progressive moves towards greater equality for the Romani community, yet Aferim!‘s abiding message is clear; never forget the lessons that history has taught us. As Costandin would put it, “In the ass of the humble, the devil sits cross-legged.”