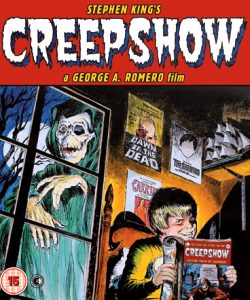 ★★★☆☆
The horror anthology film has seen something of a renaissance over the past year with The ABCs of Death and V/H/S both proving moderate successes here in the UK. Inspiration for such portmanteau projects may well come in part from Creepshow (1982), a five-strong horror compendium from celebrated genre exponents Stephen King (Carrie, The Shining) and George A. Romero (Dawn of the Dead, Martin). Making its Blu-ray debut this week just ahead of Halloween, several of the brief tales of terror featured here prove genuinely unnerving, though others are certainly showing their age. 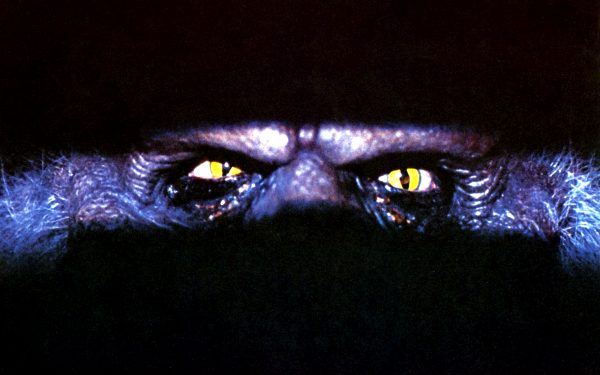 Bookended by a beleaguered young boy unable to sate his thirst for fictionalised thrills, Creepshow kicks off proper with a family reunion (of sorts) as a putrefying patriarch rises from the dead on Father’s Day for one last bite of his “cake”. King himself stars in its bizarre follow-up as a rural hick farmer plagued by a particularly virulent extraterrestrial visitor. The third offering from King and Romero goes on to introduce two now-recognisable faces in the guise of Ted Danson and Leslie Nielson, the former quickly finding himself up to his neck in trouble at the hands of the later. Meanwhile, there’s monkey business afoot in the fourth bloody entry (pictured), whilst we finish with a malicious millionaire getting his just deserts.

There’s a charmingly perverse humour that runs throughout Creepshow, reminding its audience that neither King nor Romero are strangers to the most obsidian of black comedy. Indeed, it’s the compilation’s first foray into fear that’s arguably the most successful on all fronts, with Ed Harris’ bemused boyfriend Hank taken aback by the contemptuous levels of decadent depravity that he’s somehow found himself privy to at the annual Grantham get-together. King’s macabre touch is fully felt throughout this familial vengeance tale, with Romero regular Tom Savini (who also cameos later on in proceedings) providing all the hyperreal splatter and viscera any good gorehound could ask for at this time of year.

Now more kitsch than eldritch, Creepshow remains an entertaining eighties collaborative effort from the chiller scribe and his zombie-regarding partner in slime, whilst at the same time feeling more than a little disposable when held up against either’s finest works of ghoulish invention. For fans of TV’s The Twilight Zone, Tales from the Crypt and even The Simpsons’ long-running Treehouse of Horror Halloween cycle there’s plenty here to gasp, wince and even howl at – just don’t go in expecting the same levels of razor-sharp satirical commentary and brooding intelligence that have gave King and Romero their ‘kings of cult’ crowns.