Film Review: ‘Stranger by the Lake’ 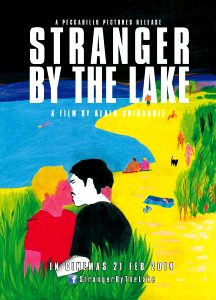 It’s here that Franck meets Michel (Tom Selleck lookalike Christophe Paou), an enigmatic, moustachioed Adonis, with whom he becomes instantly besotted. Completely paralysed by the prick of Cupid’s arrow, Franck is so blinded by passion that the sight of Michel murdering his former boyfriend fills him with excitement and hope rather than fear and repulsion. The two quickly begin a fiery relationship, but the discovery of the body quickly brings Franck and Michel’s late night liaisons to the attention of the local police detective; their passionate, and potentially lethal relationship pulsating into a tense and explosive crescendo of sexual desire. 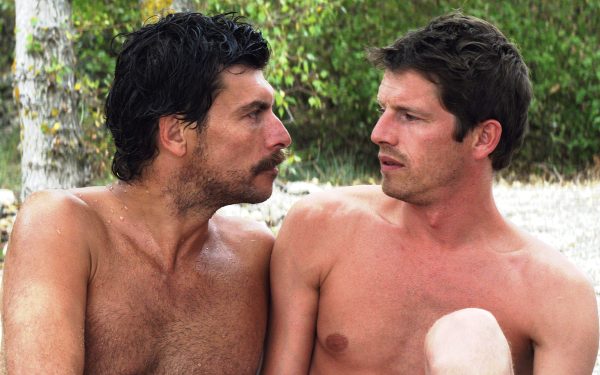 Guiraudie blinds us with the piercing brightness of the sun, whilst the audibly dissonant presence of nature yields an uncomfortably sequestered ambiance over this homosexual arcadia. The film’s remote, lakeside cruising hotspot creates the perfect environment for a tense thriller, the voyeuristic intent of these promiscuous sunbathers allowed to natural evolve from erotic deviancy to murderous resolve. Guiraudie’s haptic approach to cinematography and the tight, unflinching gaze of the camera combines impeccably with the constrictive setting and culminates in an belligerently barbarous approach to filmmaking – creating a sense of vulnerability within the viewer by incarcerating the audience in this prison of desire.

Enhanced by the film’s stripped back aesthetics, Guiraudie’s macabre approach to sex as an erotic yet perilous act leads to countless readings of this erogenous thriller. Intercourse is freely available to these men, yet for each of them the heart remains a lonely hunter. Entrenching the narrative within the bucolic opulence of this almost Eden like haven paints a fascinating microcosm of gay culture entirely entwined within nature. The true antagonist of Stranger by the Lake is the ubiquitous peril of sexually transmitted diseases that often haunts the pursuit of casual sex – especially within the gay community, where the media representation of aids has often been aligned to right wing homophobic propaganda.

Michel’s dominant demeanour and its effect on Franck’s moral lucidity beautifully symbolises the degenerative effects of the Aids virus and helps fuel the sardonically melodramatic tone in which Guiraudie is allowed to construct this fascinating rally for homosexual equality. Stranger by the Lake presents the dichotomy between wanting and loving , highlighting the incongruous relationship between love and passion, whilst all the time attuned to the heightened carnal desires of masculinity. Caressing and coaxing its way under your skin, Guiraudie’s latest is an amorous, raw and chillingly seductive psychological thriller full of razor-sharp suspense and an abundance of stylish eroticism.

You can read our enlightening interview with Stranger by the Lake director Alain Guiraudie by following this link.