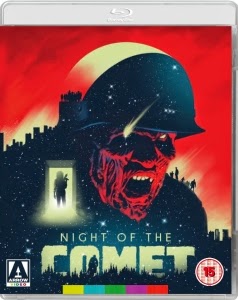 Arrow Video has once again dug down deep into the cornucopia of neglected cult titles to unearth a gem. Thom Eberhardt’s cheaply-made but impressive-looking apocalyptic sci-fi/horror yarn, 1984’s Night of the Comet is George A. Romero-style zombie invasion infused with a Valley girl sensibility. While it doesn’t quite have the budget or resourcefulness to fully deliver in this kitschy B-movie premise, it remains a fun ride nonetheless. Opening on the eve of a huge comet passing by Earth, global celebrations take a swift dive when mankind is all but wiped out and turned into piles of red dust. Two sisters, Samantha (Kelli Maroney) and the older Regina (Catherine Mary Stewart), avoid obliteration. 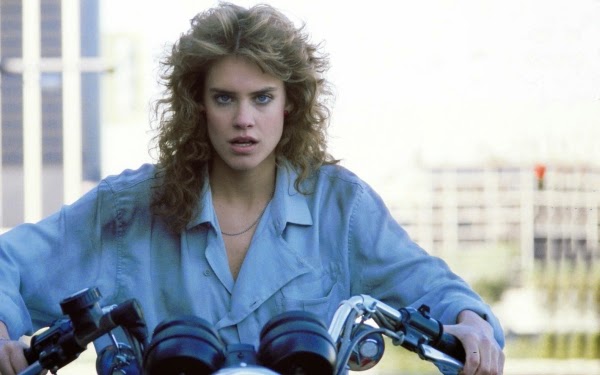 Night of the Comet is an unmistakable product of its time. This is end-of-the-world eighties style, the largely breezy content at odds somewhat with the sobering subject matter. Even the zombified humans, transformed as a result of atmospheric poisoning from the comet, aren’t particularly threatening. In one of the film’s jarringly nutty sequences, both sisters, tooled-up to the max with heavy firepower, take time to indulge in an ill-fated shopping spree in a huge, deserted department store. We get the obligatory fashion and frolics montage played out to the sounds of Cyndi Lauper’s Girls Just Wanna Have Fun. Stewart (The Last Starfighter), meanwhile, is introduced in the film wearing what looks like a Khan-era Starfleet uniform while try to beat the highest score on a video game in the cinema where she works as a usher.

Both scenarios could only have been dreamed up by some nerdy screenwriter in his attempt to encapsulate the embodiment of the perfect girl. And yet, for all the frivolous touches, there’s still a strong visual craftsmanship on show. From scenes of a deserted down-town LA, shot through red-filtered lenses, to the effective framing a of toy duck floating alone in the pool of an eerily quiet suburban garden (both of which look fantastic in this remastered version), the imagery is equally as powerful and affecting as any similarly-themed work. Night of the Comet does falter in its second half, opting instead for a fairly flat and contrived escape sequence involving the rescue of two irritatingly cute children from the clutches of some crazed infected scientists. Thankfully, budgetary constricted finale isn’t enough to diminish initial enjoyment of a film which offers the comforting reassurance that the human desire to shop doesn’t diminish after most of the world has been snuffed out.

You could win a Dual Format copy of Night of the Comet with our latest competition. Just follow this link to enter.