Film Review: ‘A Pigeon Sat on a Branch Reflecting on Existence’

Widely-acclaimed Swedish director Roy Andersson’s latest offering, A Pigeon Sat on a Branch Reflecting on Existence (2014) aims to demythologise the commercial image of reality, shutting the door on the stock-photo swaths of smiling happy faces of advertising and instead focus on the world’s ignored. Observing humanity’s endless capacity for error, cruelty and self-humiliation, Pigeon presents the audience with thirty-nine tragic sketches that pontificate on varying themes of solitude, regret, boredom, and death in a fittingly mordant finale to to the Swedish auteur’s trilogy about ‘being human’ which began in 2000 with Songs from the Second Floor and continued with You, the Living (2007). 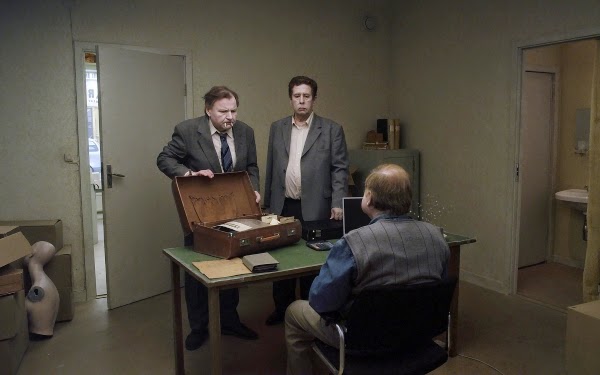 A comedic dioramist with a penchant for tragedy and astringent humour, the backbone of Andersson’s latest revolves around the exploits of two travelling salesmen as they try to peddle novelty items in a town devoid of cheer. However, Andersson shuns linear storytelling, taking time-out to observe the various characters that populate the background of his frame. His characters have a disconcerting habit of holding your gaze unblinkingly and are frequently observed on the phone morosely declaring “I’m happy to hear that you’re doing fine” with each scenario unified by a collective sense of vulnerability and hopelessness. In their eyes there’s something unreadable, that doesn’t want to be read; a determined blankness that conceals an overwhelming effort to disappear completely.

The weight of history can also be felt permeating the narrative; from one magical scene in a bar where we’re suddenly transported back to 1943 to partake in a riotous sing-a-long, to a torturous scene of a chain-gang of slaves being steered into a cylindrical vault for the amusement of a dinner party. There’s no great drama in Andersson’s work, yet each of his scenes are precariously balanced on the fulcrum between the marvellous and the vulgar; swaddled in surrealism and constantly on the verge of telling a truly great story. Pigeon is rendered in clean, unhurried lines, with a precision that‘s both anatomical and emotional, an isolated space in which Andersson can allow his imagination to run wild. Despite the film’s washed-out palette of solemn greys and eggshell blues there’s a striking similarity to the paintings of Edward Hopper with each of these meticulously framed scenes like a landscape coming to life. This employment of hyper-realism creates an almost abstract sensibility, with imagery appearing stark and foreboding, yet layered with an abundance of meaning.

Every element of these idiosyncratic dioramas is carefully positioned, from the interior arrangement of the cast to the rigid sight lines that incarcerate them, highlighting their lack of social mobility whilst imprisoning them within their individual moments of embarrassment. By demonstrating how little has changed in society since the violent acts of monarchy to the rise of fascism and the current exploitative mechanisms of capitalism, Andersson successfully demonstrates the cyclical nature of human cruelty. Despite the tragic situations he places his characters in, he has a clear and unreserved empathy for each of them, with the simplicity of his composition affording the viewer enough clarity to reflect on their own existence. As with any anthology, Pigeon struggles to sustain a steady momentum but remains a fine exercise in re-appropriating the language of advertising in order to comment on the alienation and sense of despondency felt throughout the world.