Over the past few years, the film industry’s realisation that profits lie with a swathe of older viewers – the coined term is ‘the grey pound’ – has led to a plethora of films aimed squarely in their direction. The UK has seen big hits like The Last Exotic Marigold Hotel (2011) which have cornered their market without alienating wider audiences, reaping the rewards. New romantic comedy Elsa & Fred (2014) threatens to fall short in its attempts the capture the same spirit. It stars Shirley MacLaine and Christopher Plummer as a pair of neighbouring oldies, struggling to breathe life into a staid scenario with rote characters but the duo’s undeniable quality manages to warm things up. 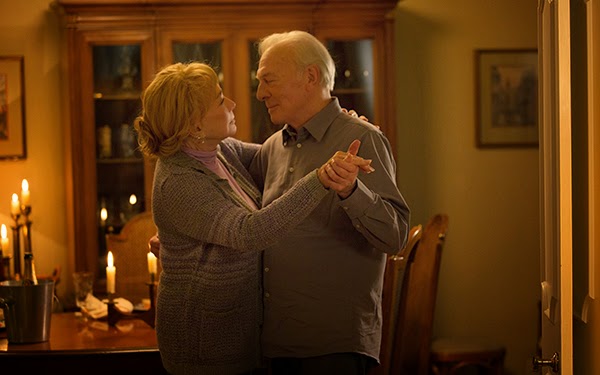 “Are you aware of the living dead?” asks Plummer’s Fred at one point. “I am that rare case of the dead living. I seem alive, but I am already dead.” It’s both a curmudgeonly summation of the his own situation, and an unintentional description of the general leaden feeling that the opening half of Michael Radford’s film engenders. MacLaine’s Elsa is a cloyingly kooky grandma who blares hip-hop music out of her car radio and lusts for life with a twinkle in her eye. Suitably opposed is Plummer’s Fred, a tired and grouchy old man whose daughter (Marcia Gay Harden) moves him in next door to Elsa. The stereotypical characters feel flat and matters are hardly helped by oddly exuberant performances from Gay Harden and Chris North (who honestly looks like he’s from another film) in supporting roles.

But as Elsa herself asserts, these things happen in baby steps. As Plummer’s irascible exterior begins to soften, so too does the grate of MacLaine’s tiresome vim. Suddenly, the familiar caricatures are revealed as symptoms of far more engaging personal stories. Both Elsa and Fred are hopeless romantics deep down – one has indulged that proclivity all their life, the other has almost had it sapped out of them – and who can begrudge a late blooming affection. Elsa has long been infatuated with – and seen herself as – Anita Ekberg in Fellini’s La Dolce Vita (1960) and has dreamt of wading into the Trevi Fountain with Marcello Mastroianni at her side. As the bond between her and Fred deepens, Radford’s camerawork begins to nod to the great Italian’s and the picture even switches to monochrome for a late exchange. It’s foregrounds a sense of Elsa’s fanciful nostalgia and the fact that Fred hardly feels any. He can’t recall the last time he laughed, and fortunately he’s run into someone to remind him how. It’s corny and sentimental, of course, but Elsa & Fred manages to pull the ship around after an uninspiring start and concludes with two lonely people enjoying the good life.