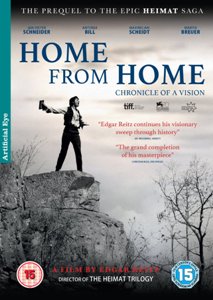 For more than thirty years, German filmmaker Edgar Reitz has devoted his career to chronicling his homeland through his ongoing Heimat series. He returns to the lineage of the Simon family with Home from Home: Chronicle of a Vision (2013), an elegiac pastoral epic that profoundly values its sense of place whilst coveting the exotic allure of faraway asylum. Clocking in at over fifty hours in total, the series has explored national identity and domestic history through the undulating fortunes of the Simons across the twentieth century. Now leaping back to the mid-nineteenth century, the fictional Hunsrück village of Schabbach provides the setting. 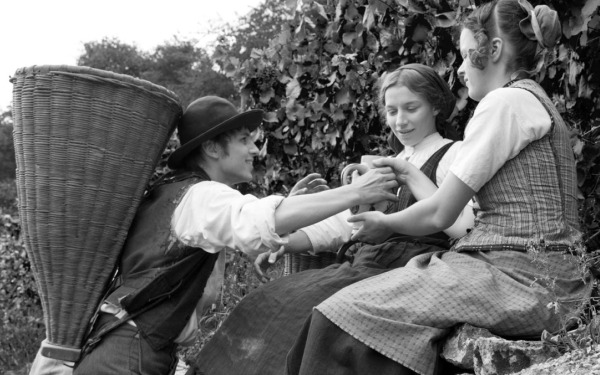 Schabbach is introduced in a black and white tableaux that will define much of what is to follow. Such photography often revels in deep contrast, submerging characters in inky shadow or bathing them in harsh glare, but here Gernot Roll’s visuals offer an aesthetic more in keeping with the narrative to come; a delicate dance within a beautiful, subtle monochrome. Passions may run deep, but they remain at a simmer – indeed, it’s often the movement of Roll’s camera that imbues proceedings with much of their drama. That motion begins in the opening shot, drifting into the village and down to the house of the lackadaisical dreamer Jakob Simon (Jan Dieter Schneider). On other occasions it jolts the audience with a careering dolly that recalls prior misdeeds, or enhances the colourless vista as it soars over a presumably yellow cornfield.

There is actual colour as well, with incidental objects – or are they – shining with life amidst the grey, from the horseshoe glowing orange with heat, to a fluttering German flag. Perhaps the most illuminating example is a shimmering gold coin that represents a very real wealth in a social strata that groans and strains against the shackle of an oppressive feudal system. The only nobility that appears in the film is casual with money and owns ornate books that he cannot even read; otherwise folk struggle against economic constraints and fantasise about a better future. That is far from just romantic folly of the rural underclass, however; the horizon is constantly dotted with the silhouettes of wagons setting off to find their fortunes in the New World.

Jakob’s fascination is of the more bookish kind, though. He shirks his labour responsibilities to learn far flung languages and longs to make the voyage to Brazil and encounter the tribes that he feels connected to. But much like the romance that he finds himself ill-suited to consummate with the pretty Henriette (Antonia Bill), his is scuppered in his hopes of exodus often by his own action and inaction. Newcomer Schneider plays him with a boyish exuberance that inspires the pathos when his plans take flight without him. When he is absent from the family home, a still silence descends upon it, but then Home from Home excels in the spaces between the action. While its runtime traverses love, death, betrayal, imprisonment and charity, it remains an epic in the quietest way. The conflicts and resolutions resonate without overwhelming as Reitz latest yarn slowly fascinates and engulfs.