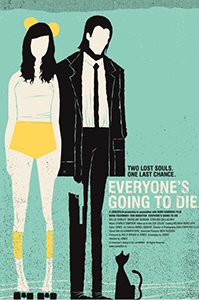 “I feel like I should say something important,” says Ray, the melancholic career criminal in the midst of a midlife crisis. This essential emptiness plagues, Everyone’s Going to Die, the visually shiny debut film from British collective ‘Jones’, which first premiered at Edinburgh in 2013 and is now in cinemas. Despite the dramatically apocalyptic promise of the title, not much happens in the kind of oddball day-in-the-life movie Hal Hartley made in the early nineties. The Unbelievable Truth in particular seems to have been an inspiration with its leftfield romance and monosyllabic hero. Melanie (Nora Tschirner) is a German girl who we first meet waking up on a floating mattress in a swimming pool with a Hitler moustache. 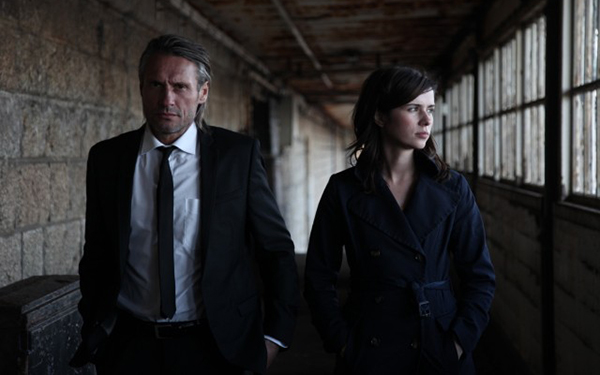 Turns out she came to a wild party dressed as Charlie Chaplin and now, hungover and dazed, she is at a bit of a loose end. She makes a friend, chats and her fiancé phones her to ask her to look after chores, but is little more than a voice on a phone. Not so much sad, as listless, Melanie happens across Ray (Rob Knighton), an enforcer of sorts who is in his home town partly to track down someone who has run away and partly to see the family of his recently deceased brother. A gun is sent to him, but consistent with the film’s own indecision with imprecise instructions. When Melanie is short 20p to pay for her roll and coffee (just don’t have the coffee?) in a local café, Ray chips in and a mysterious bond forms, as they chat about their lives etc. and play Breakfast at Tiffany’s style bonding games. Melanie accompanies Ray on a visit to his brother’s family.

This is played out for some low-fi comedy as the sister-in-law believes her husband has come back as a stray cat and Ray’s niece forces him to take part in a play she has written as part of her grieving process. Unfortunately her play has more grit and humour in it than the film itself. Such a low budget effort should be applauded – it looks slick and well shot and the collective are particularly adept at putting images to music – but these achievements play against the film. Everyone’s Going to Die should be more Jim Jarmusch-like, grungy and raw. But everything is too polished, like an efficiently made episode of a TV drama, and even the oddness feels contrived and clichéd, a generic choice rather than a real sensibility. The be-suited existential criminal with the dead pan delivery is a trope rather than a character.

Several scenes are given over to Melanie trying to explain why she is so melancholy and are freighted with emotional weight but the suspicion is the film wants her to be sad and act thusly without ever really working out why in any way that matters to us. Likewise Ray and Melanie’s relationship gives the film a story to tell with a series of filmic moments rather than feeling genuine. Take the shoplifting for larks scene: in Breakfast at Tiffany’s this makes sense because it charms the stick in the mud, conventional Paul (George Peppard), but why would it impress Ray, a man who deals with criminals on a daily basis? There are many of these unconvincing moments which is a pity, because British cinema could do with a diversion from horror and gangsters and there is real promise here.

Everyone’s Going to Die is released in UK cinemas on 26 June.