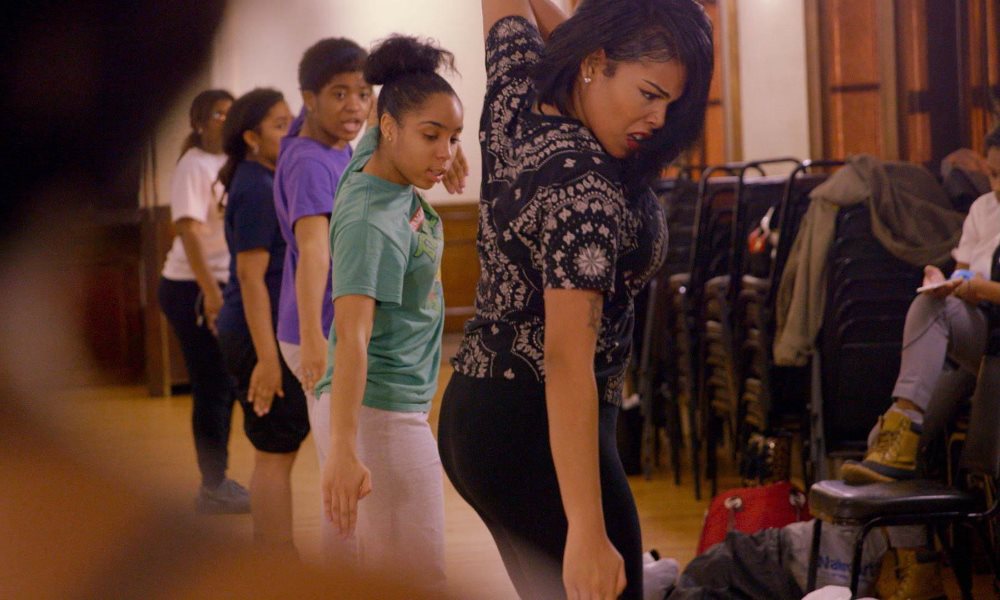 Shot in Baltimore, the inspirational Step documents the true-life story of a high-school step dance team and follows the hopes and struggles of a group of young women fighting to achieve their goals and realise their dreams, amongst a backdrop of poverty.

The Baltimore Leadership School for Young Women, an all-girl, public school for low-income students, aims to send every one of its graduates to college. Many of the young women in the inaugural senior year at the school would be the first member of their family to get a place at college if they succeed, and there is great pressure on them to achieve this. For the girls in the BLSYW Lethal Ladies step team, there is another pressure too: to win the Bowie State step competition, and with the guidance of newcomer coach Gari McIntyre, they struggle and strive, against many odds. “If they can make it through step practice, they can make it through life” she says, and pushes them to work even harder.

Filmed in the aftermath of the killing of Freddie Gray and the subsequent unrest after his death in April 2015, director Amanda Lipitz’s documentary thoughtfully explores the lives of the African-American girls featured in Step, and provides a sad reminder of the racism, inequality and poverty in modern-day America. Lipitz, who is from Baltimore herself (and also was involved in the founding of BLSYW), includes subtle sociopolitical commentary without seeming polemical, and provides an emotional roller-coaster journey which has the audience rooting for everyone involved.

Step focuses on three young women members of the step team and follows each of their lives throughout their senior year. First, there’s Blessin, who founded the step club and who really seems to come into her element with the physical creativity of it. “We’re making music with our bodies,” she says joyfully – but it is also her who seems to struggle the most with focus and commitment to the team, and she misses both academic and step classes on multiple occasions. Her drop in grades threatens her college prospects and worries her teachers. We learn that her mother has anger issues and depression, and has been absent for much of Blessin’s parent-participation: it’s hard not to draw conclusions about the impact of that.

Cori, a self-described introvert, casually remarks that she’s used to the electricity going out at home because the bills haven’t been paid. But she doesn’t feel neglected, and instead describes her mother, Triana – who was only 15 when she had Cori – as a “magic wand in human form”. “We were homeless and I didn’t know it,” she says, laughing, and it’s clear that whatever struggles the family has experienced, she’s not suffered in the process: she’s aiming for a place at the prestigious John Hopkins college and is top of her class with her grades.

Then there’s Tayla, whose strict ‘helicopter mom’ mother Maisha provides much comic relief by spontaneously dancing at the drop of a hat in the step class, making Tayla groan with embarrassment. Maisha is a corrections officer at a prison, and her dedicated work ethic and college expectations of her daughter are high. This is a story of intergenerational relationships between women, both at home and at school; support, solidarity and sisterhood are the things that fill in the gaps that could otherwise split these lives apart, and the emotions of all involved run deep. There are incredibly moving scenes, like where Paula Dofat, the school’s college coordinator, weeps when it looks like Blessin won’t make the grades to be eligible for college, and we see how invested everyone is in these girls’ success.

The combined stresses of home lives, academic grades, step training, and the possible failure of all of these, make Step a nail-biting watch. It’s a celebration of courage, triumph and redemption, and of a groundbreaking school which has helped many young women to escape the grim statistics of a city affected by poverty, crime and gun violence. It’s also a story of how the freedom of creative self-expression can offer people hope. Inspirational and moving, Step is full of heart, with a kicking beat: highly recommended.