★★★☆☆
One of few box office successes to stand out from a crop of misfiring summer blockbusters, Rupert Wyatt’s Rise of the Planet of the Apes (2011) may not be the subtlest of allegories but its revolutionary hero Caesar – played by mocap go-to man Andy Serkis – remains one of the finest digital creations of all time. Playing out as a prequel of sorts to the original …of the Planet of the Apes series (whilst also taking its cues from 1972’s Conquest of the Planet of the Apes), Wyatt’s effort is a slick, entertaining action adventure and a worthy entry in the classic sci-fi franchise.

Set in modern day San Francisco, we are introduced to Will Rodman (James Franco), a Gen-Sys scientist working towards a hypothetical cure to Alzheimer’s from which his father Charles (John Lithgow) himself suffers. Chimpanzees are the test subject of choice due to their genetic similarities with humans and Will takes great pride in treating his animals humanely. However, after disappointing results and an embarrassing incident involving an escapee ape, Will’s hard-nosed superior Jacobs (David Oyelowo) closes the programme down. Taking matters into his own hands, Will exits the lab with a generically-enhanced infant test chimp who he raises at home, naming him Caesar. 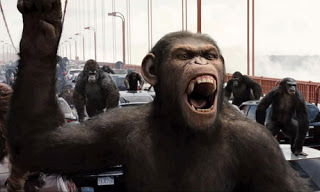 Caesar develops extremely quickly – both physically and mentally – showing abnormal signs of intelligence that suggest that Will’s Alzheimer’s cure is the real deal. However, after a violent incident involving a neighbour, Caesar is taken away and placed in a primate sanctuary run by the tyrannical John Landon (Brian Cox) and his malicious son Dodge (Tom Felton). Teased and mistreated, Caesar rounds up his fellow inmates and breaks free of his confines, heading across the city to the safety of a redwood forest.

With the exception of perhaps Lithgow’s Charles, the human characters of Rise of the Planet of the Apes are pretty inconsequential, painted in broad strokes and without any real depth. Franco’s Will is a fairly dislikeable lead human, and his relationship with  primatologist Caroline Aranha (Freida Pinto) a complete non-starter. Oyelowo may well raise a rye smile for his profit obsessed arch-villain, but offers little in the way of actual menace.

The real star of Rise of the Planet of the Apes are of course the CG apes, and in Caesar Wyatt and Serkis have created one of the great digital protagonists. You’ll naturally side with the hyper-intelligent chimp, watching him grow from an adorable infant into a strong, yet honourable leader for apekind. Campaigns are all ready underway to sway the American Academy into recognising mocap performances, and in Serkis’ Caesar they may well have found a worthy candidate.