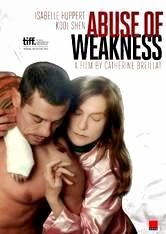 Isabelle Huppert surmounts the emotional and physical restraints of her character to breathe life into Catherine Breillat’s Abuse of Weakness (2013), an autobiographical drama about deception and dependency from a director whose oeuvre often focuses on women in peril. Huppert plays Maud, a middle-aged filmmaker of some notoriety. We first meet her as she awakes from an uncomfortable slumber to find herself paralysed by a stroke. A dominant and controlling women by profession and nature, Maud is uncomfortably reliant on the assistance of others, yet finds her yearning for company too hard to ignore. 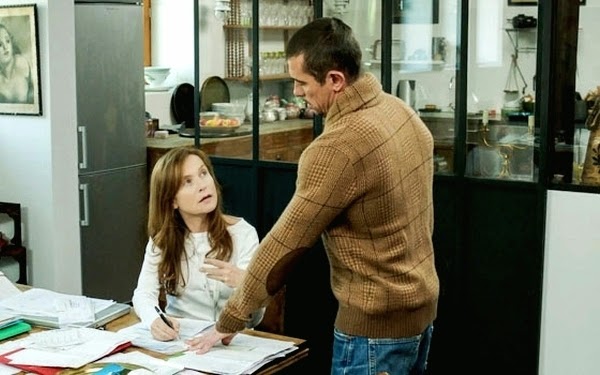 Whilst watching television one morning Maud finds her future muse in the brutish guise of a young man named Vilko (Kool Shen), an ex-con recent imprisoned for fraud who has become a minor celebrity in France after duping numerous rich families out of their life savings. Maud cherry-picks Vilko for the leading role in her upcoming film (although said film is subsequently disregarded thereafter) inviting him over to audition and instantly falling for his coarse, boorish charisma. An elegant and delicately conceived film, Breillat’s Abuse of Weakness is commendable for eschewing the gritty intimacy and grainy nostalgia that normally veils the aesthetics of autobiographical experiments, but sadly never quite fulfils its undoubted potential.

Though Breillat was herself struck by a major cerebral haemorrhage and numerous systematic epileptic seizures, the cold and clinical detachment here makes her study of gender politics, patriarchal power and emotional naiveté all too far-fetched for her otherwise confrontational and candid style to resonate. Once Maud recovers from her stroke, Abuse of Weakness becomes a rather timid two-handed drama about power and control. The film’s most fascinating element is the dichotomy between Vilko and Maud, two people who are both used to being ‘on top’, and who are inherently attracted (albeit only platonically) to the mirror image they see in each other. Frustratingly, this intriguing relationship is never really built upon, making Vilko’s predictable rouse far too implausible.

What’s more, Shen’s relative inexperience is achingly transparent compared to Huppert’s well-honed talents, with the pair often appearing far too disconnected – like two actors reading from the same script yet taking direction from different people. Huppert is no stranger to these types of demanding roles, and whilst her performance is commendable, her flailing dramatics and impaired gesticulations look rather melodramatic next to Shen’s rigid turn. What should have been a complex study into how our inherent desire for support far outlays cognitive common sense never quite comes to fruition, relegating Abuse of Weakness to a failed experiment in exhuming the mysteries that dictate human behaviour.